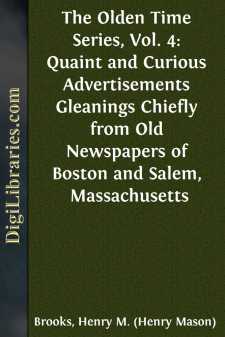 Among the mass of advertisements that have appeared from time to time in newspapers are to be found some which are very quaint and curious. Such are not, in all cases, intended by the writers to be so; but they sound so, especially to those persons who have an ear for strange or humorous things. Sometimes, indeed, it is the intention of the writers to attract particular notice by the wording of the advertisement. Oftentimes the matter may have been dictated by illiterate persons. Frequently the nature of the subject is itself sufficient to excite our humorous feelings. But whatever may be the object of the advertiser, these productions are often amusing and interesting enough to be reproduced for the benefit of those who cannot conveniently read the originals.

In 1767 "the Prince of the Power of the Air reigned with almost uncontrouled Restraint," according to a book published.

*** A Pamphlet worthy the Å¿erious Attention of every ChriÅ¿tian, eÅ¿pecially at a Time when Vice and Immorality Å¿eems to have an AÅ¿cendency over Religion, and the Prince of the Power of the Air reigns with almoÅ¿t an uncontrouled ReÅ¿traint.

In the year 1759 competition in trade had not reached the proportions that it has since assumed, for the "ill-natured opposition" which two women met with according to the "Boston Gazette" of August 13, that year, was probably nothing more or less than the treatment of some competitor in the same line,—perhaps a man mean enough to undersell. Such things have frequently occurred in our day,—some mammoth establishment cutting prices purposely, to drive some poor woman out of business whose sole dependence is in a small shop selling cotton, pins, needles, etc., barely making a living at it. "Rule or ruin" is the motto of too many in these days; and such men are called "smart," and if they get rich are fairly worshipped for their enterprise.

Hereby inform the Publick that (notwithÅ¿tanding the ill-natur'd OppoÅ¿ition they have met with, though not from the Landlord, who has fulfill'd his Engagement to them) they have remov'd their Shop from oppoÅ¿ite the Old-Brick Meeting-HouÅ¿e in Cornhill to the HouÅ¿e lately occupied by Mrs. Elizabeth Campbell, next Door to Deacon Boutineau's in Cornhill, BoÅ¿ton, where they hope their Friends and others will favour them with their CuÅ¿tom, and whom they engage to Å¿upply with the following Articles at the loweÅ¿t Rate that any fair Trader can afford them for CaÅ¿h. VIZ.