The old Santa Fe trail The Story of a Great Highway 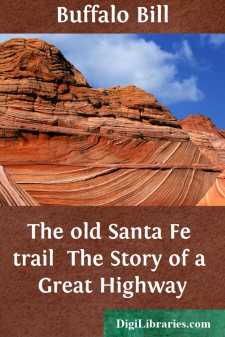 As we look into the open fire for our fancies, so we are apt to study the dim past for the wonderful and sublime, forgetful of the fact that the present is a constant romance, and that the happenings of to-day which we count of little importance are sure to startle somebody in the future, and engage the pen of the historian, philosopher, and poet.

Accustomed as we are to think of the vast steppes of Russia and Siberia as alike strange and boundless, and to deal with the unknown interior of Africa as an impenetrable mystery, we lose sight of a locality in our own country that once surpassed all these in virgin grandeur, in majestic solitude, and in all the attributes of a tremendous wilderness.

The story of the Old Santa Fe Trail, so truthfully recalled by Colonel Henry Inman, ex-officer of the old Regular Army, in these pages, is a most thrilling one. The vast area through which the famous highway ran is still imperfectly known to most people as "The West"; a designation once appropriate, but hardly applicable now; for in these days of easy communication the real trail region is not so far removed from New York as Buffalo was seventy years ago.

At the commencement of the "commerce of the prairies," in the early portion of the century, the Old Trail was the arena of almost constant sanguinary struggles between the wily nomads of the desert and the hardy white pioneers, whose eventful lives made the civilization of the vast interior region of our continent possible. Their daring compelled its development, which has resulted in the genesis of great states and large cities. Their hardships gave birth to the American homestead; their determined will was the factor of possible achievements, the most remarkable and important of modern times.

When the famous highway was established across the great plains as a line of communication to the shores of the blue Pacific, the only method of travel was by the slow freight caravan drawn by patient oxen, or the lumbering stage coach with its complement of four or six mules. There was ever to be feared an attack by those devils of the desert, the Cheyennes, Comanches, and Kiowas. Along its whole route the remains of men, animals, and the wrecks of camps and wagons, told a story of suffering, robbery, and outrage more impressive than any language. Now the tourist or business man makes the journey in palace cars, and there is nothing to remind him of the danger or desolation of Border days; on every hand are the evidences of a powerful and advanced civilization.

It is fortunate that one is left to tell some of its story who was a living actor and had personal knowledge of many of the thrilling scenes that were enacted along the line of the great route. He was familiar with all the famous men, both white and savage, whose lives have made the story of the Trail, his own sojourn on the plains and in the Rocky Mountains extending over a period of nearly forty years.

The Old Trail has more than common interest for me, and I gladly record here my indorsement of the faithful record, compiled by a brave soldier, old comrade, and friend....