The Old Northwest : A chronicle of the Ohio Valley and beyond 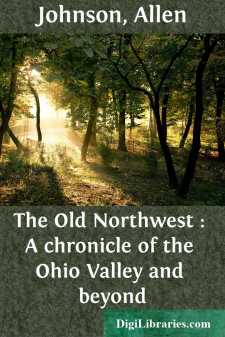 The fall of Montreal, on September 8, 1760, while the plains about the city were still dotted with the white tents of the victorious English and colonial troops, was indeed an event of the deepest consequence to America and to the world. By the articles of capitulation which were signed by the Marquis de Vaudreuil, Governor of New France, Canada and all its dependencies westward to the Mississippi passed to the British Crown. Virtually ended was the long struggle for the dominion of the New World. Open now for English occupation and settlement was that vast country lying south of the Great Lakes between the Ohio and the Mississippi—which we know as the Old Northwest—today the seat of five great commonwealths of the United States.

With an ingenuity born of necessity, the French pathfinders and colonizers of the Old Northwest had chosen for their settlements sites which would serve at once the purposes of the priest, the trader, and the soldier; and with scarcely an exception these sites are as important today as when they were first selected. Four regions, chiefly, were still occupied by the French at the time of the capitulation of Montreal. The most important, as well as the most distant, of these regions was on the east bank of the Mississippi, opposite and below the present city of St. Louis, where a cluster of missions, forts, and trading-posts held the center of the tenuous line extending from Canada to Louisiana. A second was the Illinois country, centering about the citadel of St. Louis which La Salle had erected in 1682 on the summit of "Starved Rock," near the modern town of Ottawa in Illinois. A third was the valley of the Wabash, where in the early years of the eighteenth century Vincennes had become the seat of a colony commanding both the Wabash and the lower Ohio. And the fourth was the western end of Lake Erie, where Detroit, founded by the doughty Cadillac in 1701, had assumed such strength that for fifty years it had discouraged the ambitions of the English to make the Northwest theirs.

Sir Jeffrey Amherst, to whom Vaudreuil surrendered in 1760, forthwith dispatched to the western country a military force to take possession of the posts still remaining in the hands of the French. The mission was entrusted to a stalwart New Hampshire Scotch-Irishman, Major Robert Rogers, who as leader of a band of intrepid "rangers" had made himself the hero of the northern frontier. Two hundred men were chosen for the undertaking, and on the 13th of September the party, in fifteen whaleboats, started up the St. Lawrence for Detroit.

At the mouth of the Cuyahoga River, near the site of the present city of Cleveland, the travelers were halted by a band of Indian chiefs and warriors who, in the name of their great ruler Pontiac, demanded to know the object of their journeying. Parleys followed, in which Pontiac himself took part, and it was explained that the French had surrendered Canada to the English and that the English merely proposed to assume control of the western posts, with a view to friendly relations between the red men and the white men....