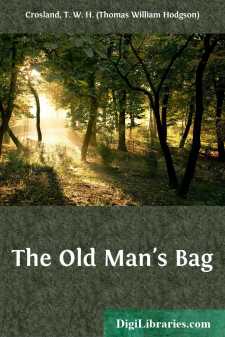 The old man said "Chuck, chuck!" and the hen came to him.

On his way home, just as he turned a corner, the old man saw a policeman. The policeman had a red suit. He was one of those policemen who wear red suits because they are tired of wearing blue. The red policeman looked very hard at the old man and very hard at his bag. In fact he looked so very very hard that the old man got frightened and turned round and ran away.

The red policeman ran after him.

"Now, sir," said the red policeman, "what have you got in that bag?"

"Nothing," said the old man.

"Oh, you wicked old person," said the red policeman. "You know perfectly well that you have a hen in it. But you must come back with me, and we will soon find out."

So the red policeman took the old man back to the place where he had dropped the bag. The bag was there, and the red policeman picked it up and opened it with great care. But the hen had got away. There was a big hole in the corner of the bag, and through this the hen had squeezed herself and run home as fast as ever she could. When the policeman found that the bag was empty he looked much puzzled. The old man for his part smiled a great deal. "I told you there was nothing in it," he said.

The red policeman said, "Well, I expect I shall have to let you go this time. But mind you don't do it again."

And the old man went home quite cheerfully with his bag under his arm.

When the old man got home to his house in the wood he hung the bag up tidily on a nail. Then he sat down in a chair and began to laugh. He laughed for nearly a quarter of an hour by the clock. At length his wife came in to him from the garden and said,

"Whatever are you laughing at?"

"Whatever are you laughing at?"

"Oh," replied the old man, holding his sides, "I am so amused!" Then he went on laughing. He laughed so much indeed that the tears came into his eyes and he nearly choked. His wife had to pat his back and give him a drink of water to put him right.

Then he told her what had happened. How he had put a hen in his bag, how the red policeman had run after him, how he dropped the bag and let the policeman catch him, and how when the policeman took him back to the bag, the hen was gone.