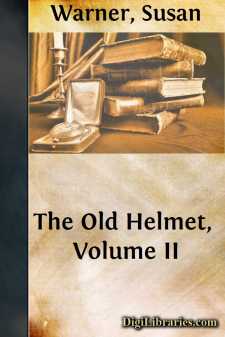 CHAPTER I. IN THE SPRING.

"Let no one ask me how it came to pass;  It seems that I am happy, that to me  A livelier emerald twinkles in the grass,  A purer sapphire melts into the sea."

Eleanor could not stay away from the Wednesday meetings at Mrs. Powlis's house. In vain she had thought she would; she determined she would; when the day came round she found herself drawn with a kind of fascination towards the place. She went; and after that second time never questioned at all about it. She went every week.

It was with no relief to her mental troubles however. She was sometimes touched and moved; often. At other times she felt dull and hopeless. Yet it soothed her to go; and she came away generally feeling inspirited with hope by something she had heard, or feeling at least the comfort that she had taken a step in the right direction. It did not seem to bring her much more comfort. Eleanor did not see how she could be a Christian while her heart was so hard and so full of its own will. She found it perverse, even now, when she was wishing so much to be different. What hope for her?

It was a great help, that during all this time Mrs. Caxton left her unquestioned and uncounselled. She made no remarks about Eleanor's going to class-meeting; she took it as a perfectly natural thing; never asked her anything about it or about her liking it. A contrary course would have greatly embarrassed Eleanor's action; as it was she felt perfectly free; unwatched, and at ease.

The spring was flushing into mature beauty and waking up all the flowers on the hills and in the dales, when Eleanor one afternoon came out to her aunt in the garden. A notable change had come over the garden by this time; its comparatively barren-looking beds were all rejoicing in gay bloom and sending up a gush of sweetness to the house with every stir of the air that way. From the house to the river, terrace below terrace sloped down, brimfull already of blossoms and fragrance. The roses were making great preparations for their coming season of festival; the mats which had covered some tender plants were long gone. Tulips and hyacinths and polyanthuses and primroses were in a flush of spring glory now; violets breathed everywhere; the snowy-flowered gooseberry and the red-flowered currant, and berberry with its luxuriant yellow bloom, and the almond, and a magnificent magnolia blossoming out in the arms of its evergreen sister, with many another flower less known to Eleanor, made the garden terraces a little wilderness of loveliness and sweetness. Near the house some very fine auriculas in pots were displaying themselves. In the midst of all this Mrs. Caxton was busy, with one or two people to help her and work under direction. Planting and training and seed-sowing were going on; and the mistress of the place moved about among her floral subjects a very pleasant representation of a rural queen, her niece thought. Few queens have a more queenly presence than Mrs. Caxton had; and with a trowel in hand just as much as if it were a sceptre....