The Old Helmet, Volume I 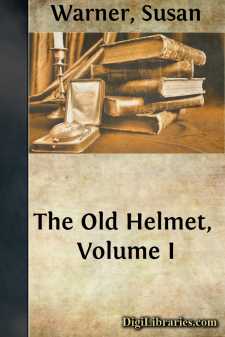 "She look'd and saw that all was ruinous,  Here stood a shattered archway plumed with fern;  And here had fall'n a great part of a tower,  Whole, like a crag that tumbles from the cliff,  And like a crag was gay with wilding flowers,  And high above a piece of turret stair,  Worn by the feet that now were silent,  Bare to the sun."

The first thing noticeable is a gleam of white teeth. Now that is a pleasant thing generally; yet its pleasantness depends, after all, upon the way the lips part over the ivory. There is a world of character discoverable in the curve of those soft lines. In the present case, that of a lady, as it is undoubtedly the very first thing you notice, the matter must be investigated. The mouth is rather large, with well cut lips however; and in the smile which comes not infrequently, the lips part freely and frankly, though not too far, over a wealth of white, beautiful teeth. So free is the curve of the upper lip, and so ready its revelation of the treasures beneath, that there is an instant suspicion of a certain frankness and daring, and perhaps of a little mischief, on the part of their possessor; so free, at the same time, as to forbid the least notion of consciousness or design in that beautiful revelation. But how fine and full and regular are those white treasures of hers! seeming to speak for a strong and perfect physical organisation; and if your eye goes further, for her flat hat is on the ground, you will see in the bountiful rich head of hair another token of the same thing. Her figure is finely developed; her colour clear and healthy; not blonde; the full-brown hair and eyes agree with the notion of a nature more lively than we assign to the other extreme of complexion. The features are not those of a beauty, though better than that, perhaps; there is a world of life and sense and spirit in them.

It speaks for her good nature and feeling, that her smile is as frank as ever just now, and as pleasant as ever; for she is with about the last one of her party on whom she would have chosen to bestow herself. The occasion is a visit to some celebrated ruins; a day of pleasure; and Eleanor would a good deal rather be walking and talking with another much more interesting member of the company, in whose society indeed her day had begun; but Mr. Carlisle had been obliged suddenly to return home for an hour or two; and Eleanor is sitting on a grassy bank, with a gentleman beside her whom she knows very little and does not care about at all. That is, she has no idea he can be very interesting; and he is a grave-looking personage, but we are not going to describe him at present.

A word must be given to the place where they are. It is a little paradise. If the view is not very extended, it is rich in its parts; and the eye and the mind are filled. The grass is shaven smooth on the bank where the two are sitting; so it is all around, under trees which stand with wilful wildness of luxuriance, grouped and scattered apparently as they would....