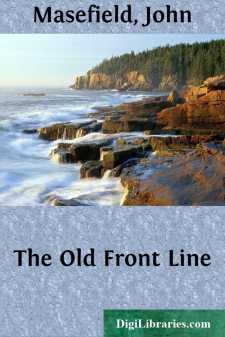 This description of the old front line, as it was when the Battle of the Somme began, may some day be of use. All wars end; even this war will some day end, and the ruins will be rebuilt and the field full of death will grow food, and all this frontier of trouble will be forgotten. When the trenches are filled in, and the plough has gone over them, the ground will not long keep the look of war. One summer with its flowers will cover most of the ruin that man can make, and then these places, from which the driving back of the enemy began, will be hard indeed to trace, even with maps. It is said that even now in some places the wire has been removed, the explosive salved, the trenches filled, and the ground ploughed with tractors. In a few years' time, when this war is a romance in memory, the soldier looking for his battlefield will find his marks gone. Centre Way, Peel Trench, Munster Alley, and these other paths to glory will be deep under the corn, and gleaners will sing at Dead Mule Corner.

It is hoped that this description of the line will be followed by an account of our people's share in the battle. The old front line was the base from which the battle proceeded. It was the starting-place. The thing began there. It was the biggest battle in which our people were ever engaged, and so far it has led to bigger results than any battle of this war since the Battle of the Marne. It caused a great falling back of the enemy armies. It freed a great tract of France, seventy miles long, by from ten to twenty-five miles broad. It first gave the enemy the knowledge that he was beaten.

Very many of our people never lived to know the result of even the first day's fighting. For then the old front line was the battlefield, and the No Man's Land the prize of the battle. They never heard the cheer of victory nor looked into an enemy trench. Some among them never even saw the No Man's Land, but died in the summer morning from some shell in the trench in the old front line here described.

It is a difficult thing to describe without monotony, for it varies so little. It is like describing the course of the Thames from Oxford to Reading, or of the Severn from Deerhurst to Lydney, or of the Hudson from New York to Tarrytown. Whatever country the rivers pass they remain water, bordered by shore. So our front-line trenches, wherever they lie, are only gashes in the earth, fenced by wire, beside a greenish strip of ground, pitted with shell-holes, which is fenced with thicker, blacker, but more tumbled wire on the other side. Behind this further wire is the parapet of the enemy front-line trench, which swerves to take in a hillock or to flank a dip, or to crown a slope, but remains roughly parallel with ours, from seventy to five hundred yards from it, for miles and miles, up hill and down dale. All the advantages of position and observation were in the enemy's hands, not in ours. They took up their lines when they were strong and our side weak, and in no place in all the old Somme position is our line better sited than theirs, though in one or two places the sites are nearly equal....