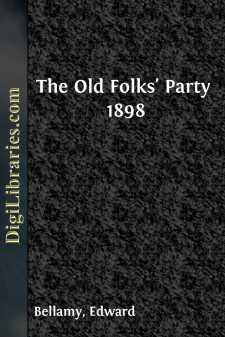 "And now what shall we do next Wednesday evening?" said Jessie Hyde, in a business-like tone. "It is your turn, Henry, to suggest."

There were six in the club, and all were present to-night in Jessie's parlor. The evening had been given to a little music, a little dancing, a little card-playing, and a good deal of talking. It was near the hour set by the club rule for the adjournment of its reunions, and the party had drawn their chairs together to consult upon the weekly recurring question, what should be done at the next meeting by way of special order of amusement. The programmes were alternately reading, singing, dancing, whist; varied with evenings of miscellaneous sociality like that which had just passed. The members took turns in suggesting recreations. To-night it was Henry Long's turn, and to him accordingly the eyes of the group turned at Jessie's question.

"Let's have an old folks' party," was his answer.

Considering that all of the club were yet at ages when they celebrated their birthdays with the figure printed on the cake, the suggestion seemed sufficiently irrelevant.

"In that case," said Frank Hays, "we shall have to stay at home."

Frank was an alert little fellow, with a jaunty air, to whom, by tacit consent, all the openings for jokes were left, as he had a taste that way.

"What do you mean, Henry?" inquired George Townsley, a thick-set, sedate young man, with an intelligent, but rather phlegmatic look.

"My idea is this," said Henry, leaning back in his chair, with his hands clasped behind his head, and his long legs crossed before him. "Let us dress up to resemble what we expect to look like fifty years hence, and study up our demeanor to correspond with what we expect to be and feel like at that time, and just call on Mary next Wednesday evening to talk over old times, and recall what we can, if anything, of our vanished youth, and the days when we belonged to the social club at C———."

The others seemed rather puzzled in spite of the explanation. Jessie sat looking at Henry in a brown study as she traced out his meaning.

"How in the world did such an odd idea come into your head?" asked pretty Nellie Tyrrell, whose dancing black eyes were the most piquant of interrogation points, with which it was so delightful to be punctured that people were generally slow to gratify her curiosity.

"I was beginning a journal this afternoon," said Henry, "and the idea of Henry Long, aetat. seventy, looking over the leaves, and wondering about the youth who wrote them so long ago, came up to my mind."

Henry's suggestion had set them all thinking, and the vein was so unfamiliar that they did not at once find much to say....