The Old Bachelor: a Comedy 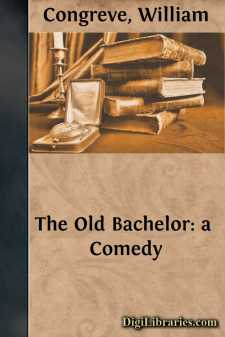 TO THE RIGHT HONOURABLE CHARLES, LORD CLIFFORD OF LANESBOROUGH, etc.

My Lord,—It is with a great deal of pleasure that I lay hold on this first occasion which the accidents of my life have given me of writing to your lordship: for since at the same time I write to all the world, it will be a means of publishing (what I would have everybody know) the respect and duty which I owe and pay to you.  I have so much inclination to be yours that I need no other engagement.  But the particular ties by which I am bound to your lordship and family have put it out of my power to make you any compliment, since all offers of myself will amount to no more than an honest acknowledgment, and only shew a willingness in me to be grateful.

I am very near wishing that it were not so much my interest to be your lordship’s servant, that it might be more my merit; not that I would avoid being obliged to you, but I would have my own choice to run me into the debt: that I might have it to boast, I had distinguished a man to whom I would be glad to be obliged, even without the hopes of having it in my power ever to make him a return.

It is impossible for me to come near your lordship in any kind and not to receive some favour; and while in appearance I am only making an acknowledgment (with the usual underhand dealing of the world) I am at the same time insinuating my own interest.  I cannot give your lordship your due, without tacking a bill of my own privileges.  ’Tis true, if a man never committed a folly, he would never stand in need of a protection.  But then power would have nothing to do, and good nature no occasion to show itself; and where those qualities are, ’tis pity they should want objects to shine upon.  I must confess this is no reason why a man should do an idle thing, nor indeed any good excuse for it when done; yet it reconciles the uses of such authority and goodness to the necessities of our follies, and is a sort of poetical logic, which at this time I would make use of, to argue your lordship into a protection of this play.  It is the first offence I have committed in this kind, or indeed, in any kind of poetry, though not the first made public, and therefore I hope will the more easily be pardoned.  But had it been acted, when it was first written, more might have been said in its behalf: ignorance of the town and stage would then have been excuses in a young writer, which now almost four years’ experience will scarce allow of.  Yet I must declare myself sensible of the good nature of the town, in receiving this play so kindly, with all its faults, which I must own were, for the most part, very industriously covered by the care of the players; for I think scarce a character but received all the advantage it would admit of from the justness of the action.

As for the critics, my lord, I have nothing to say to, or against, any of them of any kind: from those who make just exceptions, to those who find fault in the wrong place.  I will only make this general answer in behalf of my play (an answer which Epictetus advises every man to make for himself to his censurers), viz.: ‘That if they who find some faults in it, were as intimate with it as I am, they would find a great many more.’  This is a confession, which I needed not to have made; but however, I can draw this use from it to my own advantage: that I think there are no faults in it but what I do know; which, as I take it, is the first step to an amendment....