The Ocean Cat's Paw The Story of a Strange Cruise 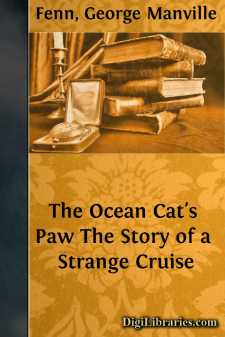 This was shouted cheerily, and the reply thereto was a low muttering, ending with a grunt.

It was a glorious day on Dartmoor, high up in the wildest part amongst the rugged tors, where a bright little river came flashing and sparkling along, and sending the bright beams of the sun in every direction from the disturbed water, as an eager-looking boy busily played the trout he had hooked, one which darted here and there in its wild rush for freedom, but all in vain, for after its little mad career it was safely brought to bank, and landed. There was no need to use the light net which hung diagonally and unnecessarily across its owner’s back, for the glittering little speckled trout was only about the size of a small dace, though it fought and kicked as hardily as if it had weighed a pound, and indulged in a series of active leaps as it was slipped through the hole in the lid of a creel, to drop into companionship with half-a-score of its fellows, which welcomed the new prisoner with a number of leaps almost as wild as its own.

The utterer of the grunt, a stoutly-built man who might have been of any age, though he could not have been very young, judging from his bristly greyish whiskers, was also busily occupied, but in a calmer, more deliberate way.

He had no creel slung from his shoulder, but a coarse clean wallet that was rather bulgy, its appearance suggesting that it was carried because it contained something to eat, while its owner held in one hand, slung by a stoutish lanyard, a big, wide-mouthed glass bottle half full of water, and in the other hand a little yellow canvas net attached to a brass ring at the end of a stick, the sort of implement that little boys use when bound upon the chase and capture of the mighty “tittlebat.” And as his younger companion shouted and landed his little mountain trout, the net was being carefully passed under water, drawn out and emptied upon the fine lawn-like grass, and what looked like a little scrap of opalescent jelly was popped into the wide-mouthed bottle.

“You got one too, uncle?” shouted the boy, who was higher up the stream.

“Yes; some very nice specimens down here. Are you getting plenty of sport, Rodd?”

“Yes, uncle,” replied the boy, who was carefully examining his tiny artificial gnat before beginning to whip the stream again. “They are rising famously; but they are awfully small. I shall get a dish, though, for supper.”

“Uncle,” as he was called, grunted again, and went on searching amongst the water-weeds with his net, his tendency being with the stream, while the boy, who did not scruple about stepping into the shallows from time to time, went on whipping away upward towards where one of the tors rose in a chaotic mass of broken, lichen-covered, fragmentary granite, apparently hiding in the distance the source of the little bubbling and sparkling stream.

Sometimes, as the boy struck in unison with the rise, he missed his fish, at others he hooked and held it till it broke away, and then again he transferred another to his creel, as intent upon his sport as his uncle was upon his pursuit, but still adding and adding to the contents of the creel for quite an hour....