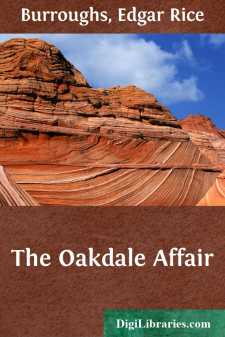 Chapter One [And only chapter ED.]

The house on the hill showed lights only upon the first floor—in the spacious reception hall, the dining room, and those more or less mysterious purlieus thereof from which emanate disagreeable odors and agreeable foods.

From behind a low bush across the wide lawn a pair of eyes transferred to an alert brain these simple perceptions from which the brain deduced with Sherlockian accuracy and Raffleian purpose that the family of the president of The First National Bank of—Oh, let's call it Oakdale—was at dinner, that the servants were below stairs and the second floor deserted.

The owner of the eyes had but recently descended from the quarters of the chauffeur above the garage which he had entered as a thief in the night and quitted apparelled in a perfectly good suit of clothes belonging to the gentlemanly chauffeur and a soft, checked cap which was now pulled well down over a pair of large brown eyes in which a rather strained expression might have suggested to an alienist a certain neophytism which even the stern set of well shaped lips could not effectually belie.

Apparently this was a youth steeling himself against a natural repugnance to the dangerous profession he had espoused; and when, a moment later, he stepped out into the moonlight and crossed the lawn toward the house, the slender, graceful lines which the ill-fitting clothes could not entirely conceal carried the conviction of youth if not of innocence.

The brazen assurance with which the lad crossed the lawn and mounted the steps to the verandah suggested a familiarity with the habits and customs of the inmates of the house upon the hill which bespoke long and careful study of the contemplated job. An old timer could not have moved with greater confidence. No detail seemed to have escaped his cunning calculation. Though the door leading from the verandah into the reception hall swung wide to the balmy airs of late Spring the prowler passed this blatant invitation to the hospitality of the House of Prim. It was as though he knew that from his place at the head of the table, with his back toward the great fire place which is the pride of the Prim dining hall, Jonas Prim commands a view of the major portion of the reception hall.

Stooping low the youth passed along the verandah to a window of the darkened library—a French window which swung open without noise to his light touch. Stepping within he crossed the room to a door which opened at the foot of a narrow stairway—a convenient little stairway which had often let the Hon. Jonas Prim to pass from his library to his second floor bed-room unnoticed when Mrs. Prim chanced to be entertaining the feminine elite of Oakdale across the hall. A convenient little stairway for retiring husbands and diffident burglars—yes, indeed!

The darkness of the upper hallway offered no obstacle to this familiar housebreaker. He passed the tempting luxury of Mrs. Prim's boudoir, the chaste elegance of Jonas Prim's bed-room with all the possibilities of forgotten wallets and negotiable papers, setting his course straight for the apartments of Abigail Prim, the spinster daughter of the First National Bank of Oakdale....