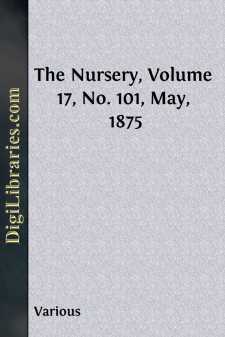 THE DOG WHO LOST HIS MASTER

pot was a little dog who had come all the way from Chicago to Boston, in the cars with his master. But, as they were about to take the cars back to their home, they entered a shop near the railroad-station; and there, before Spot could get out to follow his master, a bad boy shut the door, and kept the poor dog a prisoner.

The cars were just going to start. In vain did the master call "Spot, Spot!" In vain did poor Spot bark and whine, and scratch at the door, and plead to be let out of the shop. The bad boy kept him there till just as the bell rang; and then he opened the door, and poor Spot ran—oh, so fast!—but the cars moved faster than he.

Mile after mile poor Spot followed the cars, till they were far out of sight. Then, panting and tired, he stopped by the roadside, and wondered what he should do, without a home, without a master.

He had not rested many minutes, when he saw two little girls coming along the road that crossed the iron track. They were Nelly and Julia, two sisters. Spot thought he would try and make friends with them.

But they were afraid of strange dogs. Julia began to cry; and Nelly said, "Go away, sir; go home, sir: we don't want any thing to do with you, sir."

Spot was sorry to be thus driven off. He stopped, and began to whine in a pleading sort of way, as if saying, "I am a good dog, though a stranger to you. I have lost my master, and I am very hungry. Please let me follow you. I'll be very good. I know tricks that will please you."

The children were not so much afraid when they saw him stop as if to get permission to follow. "He is a good dog, after all," said Nelly: "he would not force his company on us; he wants his dinner. Come on, sir!"

Thus encouraged, Spot ran up, wagging his tail, and showing that he was very glad to find a friend. He barked at other dogs who came too near, and showed that he meant to defend the little girls at all risks.

When they arrived home, they gave him some milk and bread, and then took him into the sitting-room, and played with him. "Beg, sir!" said Nelly; and at once Spot stood upright on his hind-legs, and put out his fore-paws.

Then Julia rolled a ball along the floor; and Spot caught it almost before it left her hand. "Now, die, sir, die!" cried Nelly; and, much to her surprise, Spot lay down on the floor, and acted as if he were dead.

When papa came home, and saw what a good, wise dog Spot was, he told the children they might keep him till they could find the owner.

A week afterwards, they saw at the railroad-station a printed bill offering a reward of thirty dollars for Spot.

He was restored at once to his master, who proved to be a Mr. Walldorf, a German. But the little girls refused the offered reward; for they said they did not deserve it, and Spot had been no trouble to them.

Three weeks passed by, and then there came a box from New York, directed to Nelly and Julia. They opened it: and there were two beautiful French dolls, and two nice large dolls' trunks filled with dolls' dresses and bonnets,—dresses for morning and evening, for opera and ball-room, for the street and the parlor, for riding and walking....