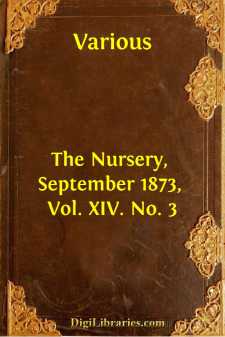 THE QUEER THINGS THAT HAPPENED TO NELLY.   ELLY BURTON had been weeding in the garden nearly all the summer forenoon; and she was quite tired out. "Oh, if I could only be dressed up in fine clothes, and not have to work!" thought she.

No sooner had the thought passed through her mind, than, as she looked down on the closely-mown grass by the edge of the pond, she saw the queerest sight that child ever beheld.

A carriage, the body of which was made of the half of a large walnut-shell, brightly gilt, was moving along, dragged by six beetles with backs glistening with all the colors of the rainbow.

Seated in the carriage, and carrying a wand, was a young lady not larger than a child's little finger, but so beautiful that no humming-bird could equal her in beauty. She had the bluest of blue eyes, and yellow crinkled hair that shone like gold.

She stopped her team of beetles, and, standing upright, said to Nelly, "Listen to me. My name is Pitpat; and I am a fairy. I see how tired you are with work. Your father, though a good man, is a blacksmith; and there is often a smirch on his face when he stoops to kiss you. Your mother wears calico dresses, and doesn't fix her hair with false braids and waterfalls. Would you not like to be the daughter of a king and queen, and live in a palace?"

"Oh, yes, you beautiful Pitpat! I would like that ever so much!" exclaimed Nelly. "Then I should be a princess, and have nothing to do but amuse myself all day."

"Take the end of my wand, and touch your eyes with it," said the little fairy.

Nelly obeyed; and in a moment, before she could wink, she found herself in a beautiful room, with mirrors reaching from the ceiling to the floor. By these she saw that she was no longer clad in an old dingy dress, nor were her feet bare; but she had on a beautiful skirt of light-blue velvet, and a bodice of the most costly lace, trimmed with ribbons; while diamonds were in her hair, and a pair of gold slippers on her feet.

Servants were in attendance on her, one of whom said, "May it please your Highness, his Majesty, your royal father, is coming." Nelly's heart fluttered. The door opened, and, preceded by two or three lackeys, a pompous old gentleman entered, clad in rich robes, a golden crown on his head, and no smirch on his face.

But, dear me, instead of catching her up in his arms, and calling her his own precious little Nelly, his Majesty simply gave her his hand to kiss, and passed on.

The queen followed in his steps. Her hair was done up in a tower of top-knots and waterfalls; and there was drapery enough on the back of her dress to astonish an upholsterer. Instead of calling Nelly "her darling," as Nelly's first mother used to do, the queen merely said, as she swept by, "Where are your manners, child?" for you must know that poor Nelly had forgotten to courtesy.

Nelly put her face in her hands, and began to cry. "Oh, you cruel Pitpat!" said she, "why did you tempt me? Oh! give me back my own dear mother in her calico dress, my own dear father with the smirch on his face, my doll Angelica, my black-and-white kitten Dainty, and my own dear, dear home beside the lovely pond where the air is so sweet and the bushes are so green."

"Take the end of my wand again, and touch your eyes with it," said the voice of Pitpat....