The Nursery, October 1877, Vol. XXII. No. 4 A Monthly Magazine for Youngest Readers 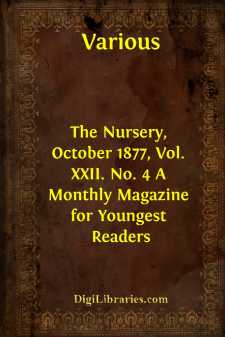 THE PARROT THAT PLAYED TRUANT.   LD Miss Dorothy Draper had a parrot. It was one of the few things she loved. And the parrot seemed to love her in return. Miss Dorothy would hang the cage outside of her window every sunny day. Sometimes an idle boy would come along, and poke a stick between the wires; and then the old lady would say, "Boy, go away!"

But one day, when the window was open, and the door of the cage was open also, Polly thought it was a good time to play truant. So she hopped out, rested on the sill a moment, and then flew into the street, from tree to tree, and from lamp-post to lamp-post.

Poor Miss Dorothy was in despair. How should she get back her lost pet? She called in a policeman, and he advised her to get out a handbill, offering a reward. So in an hour this notice was pasted on the walls near by:—

LOST!—A green-and-white parrot. It answers to the name of Polly, and can talk quite plainly. It says, "Boy, go away!" also, "Polly wants a cracker," and "No, you don't!" Any one finding this bird shall, on returning it to its afflicted owner, Miss D. Draper, No. 10, Maiden Place, receive a reward of two dollars.

Little Tony Peterkin was walking home from school, and wishing he had money enough to buy a copy of Virgil without going to his mother for it,—for she was a widow, and poor,—when he saw a man pasting this handbill on a wall. Tony read it, and said aloud, "Oh, I wish I could find that parrot!"

A girl who heard him said, "I saw a parrot just now on one of the trees in Lake Street."—"Did you?" said Tony; and off he ran. The parrot had flown from the tree to the top of the lamp-post; and when Tony got there, two women, a newsboy, and a policeman were looking up at the strange fowl.

It was the work of a second for Tony to spring at the iron post, and begin climbing up. "No, you don't!" cried the parrot. That frightened Tony, so that he almost dropped; but he took heart when he thought of the two dollars and a new fresh copy of Virgil.

Up he climbed; but just as he was going to put his hand on the little cross-bar under the lamp, "Boy, go away!" cried Poll. Tony's heart beat at these words; but he held on. "Poll, Poll, pretty Poll!" cried he: "come and get a cracker!"—"Polly wants a cracker," replied the bird.

The truth was, Polly was tired of the street, and wanted to get back to Miss Dorothy. So, when Polly heard Tony's kind words, she flew down to the cross-bar, and, when he held out his hand, she lighted on it, and Tony slid with her down the post to the ground.

"Well done, my lad," said the policeman. He went with Tony, carrying the bird, to No. 10, Maiden Place; and Miss Dorothy was so much pleased that she gave Tony three dollars instead of two. On his way home he bought that copy Of Virgil.

A mild summer day, and one, two, three, four children sitting on the ground by the pond, and feeding the ducks!

But I think I hear the larger girl, who is standing up, say to the sitters, "Children, don't you know better than to sit there on the damp earth?...