The Nursery, May 1877, Vol. XXI. No. 5 A Monthly Magazine for Youngest Readers 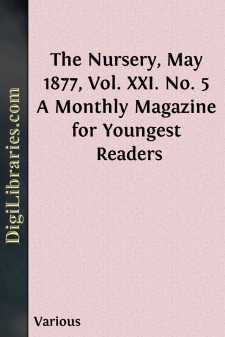 THE YOUNG LAMPLIGHTER.   ALLACE is a boy about ten years old, who lives in a town near Boston. He has a brother Charles, eighteen years of age. These two brothers are the town lamplighters.

There are at least fifty lamps to be lighted every night; and some of them are a good deal farther apart than the street-lamps in large cities. Charles takes the more distant ones for his part of the work, and drives from post to post in a gig.

Wallace, being a small boy, calls to his aid his father's saddle-horse. This horse is a kind, gentle creature, and as wise as he is kind. He and Wallace are about the same age, and have always been good friends.

So when Wallace puts the saddle on him every evening, just before dark, the horse knows just what is going to be done. He looks at the boy with his great bright eyes, as much as to say, "We have our evening work to do, haven't we, Wallace? Well, I'm ready: jump on."

Wallace mounts the horse; and they go straight to the nearest lamp-post. Here the horse stops close by the post, and stands as still and steady as the post itself.

Then Wallace stands upright on the saddle, takes a match from his pocket, lights the lamp, drops quickly into his seat again, takes up the bridle, gives the word to the horse, and on they go to the next lamp-post.

So they go on, till all the lamps allotted to Wallace are lighted. Then they trot home merrily, and, before Wallace goes to bed himself, I am sure he does not forget to see that his good horse is well fed and cared for.

This is a true story.

Because our earth has one sun and one moon, you may think all earths have only one; but wise men have looked through their telescopes, and have discovered that some of the stars which look to us like single stars are really double; and many of them are clusters of three or four, all lighting up the same planets.

Those earths, then, have more than one sun: they have two, three, or four, as the case may be. Think of two suns. How bright it must be! And imagine one of them red, and the other blue, as some of them are. Wouldn't you feel as if you were living in a rainbow?

And how would you like to look out of the window in the evening and see four moons? The wise men can see through their telescopes that Jupiter has four and Saturn eight. (You remember I told you Jupiter and Saturn are two of the earths lighted up by our sun.) Shouldn't you think so many moons would make the nights so bright that one could hardly go to sleep?

On the whole, I think we get along very well as we are; and I hope the people who live in the brightness of two suns have strong eyes given them. It must be very beautiful, though. Perhaps you can get an idea how it seems to have a red sun, if you look through a piece of red glass; but I do not believe we can any of us imagine what it would be like to have two suns of different colors.

Do you think a red sun shining on a moon makes a red moon? A colored sun or a colored moon seems very strange to us; but I suppose the people that are used to them would think our white light strange....