The Nursery, May 1873, Vol. XIII. A Monthly Magazine for Youngest People 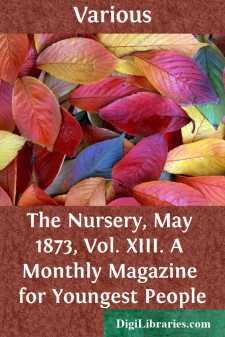 MABEL'S COW.   HE cow nearest to you in the picture is Mabel's cow; and Mabel Brittan is the taller of the two girls on the bridge. I will tell you why the cow is called Mabel's cow.

Her family live in a wild but beautiful part of New Hampshire, where it is very cold in winter, and pretty warm in summer. There are only two small houses within a mile of her father's. He keeps cows, and makes nice butter from the cream.

Not long ago he bought a cow at a great bargain, as he thought; for she was a fine-looking young cow, and the price he paid for her was only twenty-five dollars.

But, before he had got through the first milking of her, he began to think she was dear at any price. She would kick over the pail, make vicious plunges, and try to hook him. Indeed, he grew afraid of her, she was so violent.

He took down a heavy whip, and was about to strike her in great anger, when his little daughter Mabel caught his arm, and said, "She will never be good for any thing if you strike her. Let me try to manage her."

And, before Mr. Brittan could prevent her, Mabel had her arm round the cow's neck, and was calling her all the sweet pet names she could think of.

"All that is very well," said her father; "but just you try to milk her: that's all. No, you sha'n't venture. It would be as much as your life is worth."

"I am very sure she will let me milk her," said Mabel. "Do not forbid my trying. She looks at me out of her big eyes as if she thought me her friend."

So Mabel took the tin pail, and sat down on the little low milking-stool; and soon, to her father's astonishment, she finished milking, the cow having stood all the while as quiet as a lamb.

It was found that the cow had been badly treated by the man who had owned her, and who had been in the habit of milking her. Being a high-spirited beast, she then gave him so much trouble, that he was soon glad to be rid of her.

She would now let no one touch her but Mabel: so Mr. Brittan finally said that the cow should be Mabel's cow, and that all the butter which the cow yielded should be hers. But Mabel is a generous girl; and so she shares the money she earns. Her mother, her sister Emily, and her brothers Oliver and Frank, all get a part of it.

Mabel has given the cow a name; and the cow will come to her when she calls her by name. The name is a very pretty one for a cow, I think. It is Dido.

Little Harold was delighted, one winter morning, to hear that he could go to his grandpapa's with his mother, for a few days. He had often been there in summer, when the grass was green, and flowers were blooming around the old homestead; but this was his first winter visit.

A pleasant ride of forty miles by the railway, then a short ride in an old-fashioned stage-sleigh, and the sober old horses, with their jingling bells, stopped before grandpa's pleasant home.

Harry ran up to the door, shouting, "We've come, grandpa! We've come!" The door opened; the little fellow rushed into his grandpa's arms; and golden curls and thin gray locks were mingled for an instant....