The Nursery, March 1878, Vol. XXIII. No. 3 A Monthly Magazine for Youngest Readers 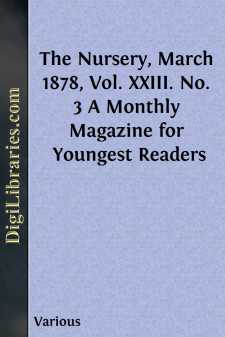 NOBODY'S DOG.   NLY a dirty black-and-white dog!You can see him any day,Trotting meekly from street to street:He almost seems to say,As he looks in your face with wistful eyes,"I don't mean to be in your way."His tail hangs drooping between his legs;His body is thin and spare:How he envies the sleek and well-fed dogs,That thrive on their masters' care!And he wonders what they must think of him,And grieves at his own hard fare.Sometimes he sees a friendly face,—A face that he seems to know;And thinks it may be the masterThat he lost so long ago;And even dares to follow him home,For he loved his master so!Poor Jack! He's only mistaken again,And stoned and driven back;But he's used to disappointments now,And takes up his beaten track;Nobody's dog, for whom nobody cares,—Poor unfortunate Jack! Fred B. King.     IN THE SWING.

The swing was hung from an old oak-tree in grandmother's grove. There Mabel and I used to go every fine summer morning before breakfast, and swing for five minutes. We did not swing longer than that because too much of this kind of exercise is not healthy.

Once, when I had swung her very high, Mabel had a fall, but it did not hurt her, for she fell among some tufts of soft grass; but, if her head had struck a stone, it might have done her great harm. After that we were both more careful.

Five years have gone by since those days. We both go to school, and I do not think you would know us, from the likenesses in the picture. But next summer we hope to visit grandmother once more, and we shall revive old times in the swing under the old oak-tree.

The sly squirrels will come out and look at us; the birds will twitter, and try to make us think that they have no nests in the trees and bushes thereabouts: but we shall say, "We shall do you no harm, birds, squirrels, beetles—no harm—for we love you all! So play on, and please let us play too."

Edith.   THE NEW MOON. Pretty new moon, white new moon,What do you bring in your horn?Silver light to paint black nightAs fair as the early dawn?Sweet new moon, pretty new moon,Where did you harvest your rays?In the deeps of dark were you but a sparkTill the sun shone along your ways?Fair new moon, kind new moon,Will my wish come true some day,When you're but a ghost of yourself, at the most,And your glory passes away? Mary N. Prescott.   HOW MY BOYS HELPED THEIR MOTHER.

When we first came here to live, the lot next to ours was vacant; but afterwards a house was built on it, and the boys were very much interested in the progress of the building. Often, when obliged to stay in doors, they would sit by the window, watching the work on the "new house," as they called it.

Mr. Little, the owner of the house, was an old acquaintance of ours, and very fond of children. So occasionally, when he came to oversee the work, I would allow the boys to go up and see him; and he would give them a few nails, or some blocks to play with.

One day, Mr. Little called their attention to the wood which the carpenters had thrown aside as rubbish, and told them he was going to pick up some of it, and send it home to burn; "and now, boys," said Mr....