The Nursery, March 1877, Vol. XXI. No. 3 A Monthly Magazine for Youngest Readers 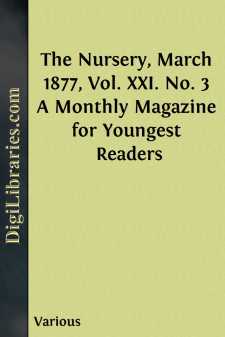 AN OLD-TIME SCENE.   OOK at the picture, and see if you can tell what has roused all those children up so early in the morning. There is Mary in her stocking-feet. There is Ann in her night-dress. There is Tom, bare armed and bare legged.

Why have they all left their beds, and run into the play-room in such haste? And why is little Ned, the baby, sitting up in the bed, as though he wanted to come too?

"Oh!" perhaps you will say, "it is Santa Claus; and the children are trying to catch him." Oh, no! Santa Claus never allows himself to be caught in that way. You never see even his feet. He never leaves his shoes on the floor, nor dirty old brushes, nor shovels. It is not Santa Claus—it is only a chimney-sweeper.

"But what is a chimney-sweeper?" I think I hear you ask. Well, we do not have such chimney-sweepers now-a-days, at least not in this part of the world. But ask your grandfathers and grandmothers to tell you about the chimney-sweepers that were to be seen in Boston forty or fifty years ago, and I warrant that many of them will remember just such a scene as you see in the picture.

In those days, before hard coal fires had come in use, chimney-sweepers were often employed. They were small boys, working under the orders of a master in the business, who was very often a hard master. Generally they were negroes; but, whether so or not, they soon became so black with soot, that you could not tell them from negroes.

The chimney-sweepers always came early in the morning, before the fires were lighted; and their coming was a great event to the children of a household. "When a child," says a famous English writer, speaking of the chimney-sweepers of London, "what a mysterious pleasure it was to witness their operation!—to see a chit no bigger than one's self enter into that dark hole—to pursue him in imagination, as he went sounding on through so many stifling caverns—to shudder with the idea, that 'now surely he must be lost forever!'—to revive at hearing his feeble shout of discovered daylight,—and then (oh, fulness of delight!) running out of doors, to come just in time to see him emerge in safety!"

There are chimney-sweepers even now; but none of the old-fashioned kind. In many places it is forbidden by law to send boys up the chimneys. So the modern chimney-sweeper puts his brush on the end of a pole, which is made in joints, like a fishing-rod, and, by attaching joint after joint, thrusts it farther and farther up the chimney.