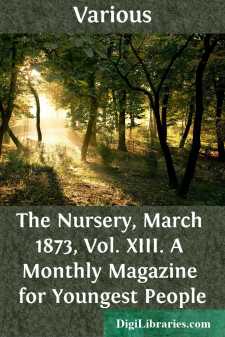 A TRUE STORY.   HEN I was in Boston about a year ago, I stopped one day at the corner of Washington Street and Franklin Street to witness a pretty sight.

Here, just as you turn into Franklin Street, on the right, a poor peddler used to stand with a few baskets of oranges or apples or peanuts, which he offered for sale to the passers-by.

The street-pigeons had found in him a good friend; for he used to feed them with bits of peanuts, crumbs of bread, and seed: and every day, at a certain hour, they would fly down to get their food.

On the day when I stopped to see them, the sun shone, and the street was crowded; and many people stopped, like myself, to see the pretty sight.

The pigeons did not seem to be at all disturbed or frightened by the noise of carriages or the press of people; but would fly down, and light on the peddler's wrist, and peck the food from the palm of his hand.

He had made them so tame, that they would often light on his shoulders or on his head; and, if he put food in his mouth, they would try to get it even from between his teeth.

The children would flock round to see him; and even the busy newsboy would pause, and forget the newspapers under his arm, while he watched these interviews between the birds and their good friend.

A year afterwards I was in Boston again; but the poor peddler and his birds were not to be seen. All Franklin Street, and much of the eastern side of Washington Street, were in ruins. There had been a great fire in Boston,—the largest that was ever known there; and more than fifty acres, crowded with buildings, had been made desolate, so that nothing but smoking ruins was left. This was in November, 1872.

I do not know where the poor peddler has gone; but I hope that his little friends, the pigeons, have found him out, and that they still fly down to bid him good-day, and take their dinner from his open hand.

The picture is an actual drawing from life, made on the spot, and not from memory. The likeness of the peddler is a faithful one; and I thank the artist for reproducing the scene so well to my mind. Folks do say that he has hit off my likeness also in the man standing behind the taller of the two little girls.