The Nursery, June 1877, Vol. XXI. No. 6 A Monthly Magazine for Youngest Readers 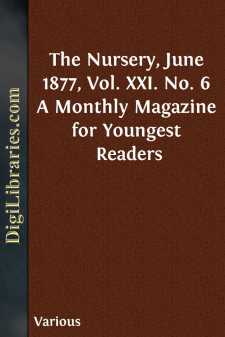 ARTHUR'S NEW SLOOP.   OW, boys," said Uncle Martin, "if you were at sea in a vessel like this, what should you do when you saw a squall coming up?"

"I should take in all sail, and scud under bare poles," said Arthur.

"But what if you did not want to be blown ashore?"

"Then I should leave out the first reef, so as to catch as much wind as I could risk, and steer for the sea, the sea, the open sea."

"Well, that's pretty well said, though not just as a sailor would say it. Look here, Henry, where is the stern?"

"You have your left hand on it, sir."

"That's true. And where's the rudder?"

"Your little finger is resting on it."

"What sort of a craft do you call this?"

"If you were holding the tiller, and I were to say, 'Larboard' or 'port,' what should you do?"

"If I stood looking forward, I should move the tiller to the left side of the vessel."

"That's right; and, if I said 'Starboard,' you would move the tiller to the right side.—Now, boys, which of you can tell me the difference between a tiller and a helm?"

"I always thought," said Arthur, "that they meant pretty much the same thing."

"No: the difference is this," said Uncle Martin: "A tiller is this little bar or handle by which I move the rudder. The helm is the whole of the things for steering, consisting of a rudder, a tiller, and, in large vessels, a wheel by which the tiller is moved. So a tiller is only a part of the helm."

"Yes, now I understand," said Arthur. "How jolly it is to have an Uncle Martin to explain things!"

"You rogue, you expect me to be at the launch, eh?"

"Yes, uncle: I've got a bottle of hard cider to smash, on the occasion. It ought to be rum, by the old rule."

"The best thing to do with rum is to pour it into the sea," said Uncle Martin. "But what's the name of the new sloop?"

"Ah! that you will hear at the launch," said Arthur.

Alfred Selwyn.     TOT'S TURNOVER. Sugared and scalloped and cut as you see,With juicy red wreath and name, t-o-t,This is the turnover dear little TotSet in the window there all piping hot:Proud of her work, she has left it to cool:Benny must share it when he's out of school.   Scenting its flavor, Prince happens that way,Wonders if Tot will give him some to-day.Benny is coming, he's now at the gate—Prince for himself decides not to wait.Oh, pity! 'tis gone, and here you and ISee the last that Tot saw of that pretty pie. M. A. C.   A TRUE STORY.

Once, when I lived in the country, some robins built a nest in a lilac-bush in the garden. One day I looked in the nest, and saw one little green egg. Two or three days after, I saw three more little green eggs, and pretty soon what did I see there but four little cunning baby-birdies?

The old birds seemed so happy as they fed their little ones, who opened their mouths wide to take the food in, that I loved dearly to watch them.

One night there came a terrible storm of wind and rain. When I awoke in the morning, and opened my window, there were the old robins flying about the garden in great distress, making such a dreadful cry, that I went out to see what was the matter....