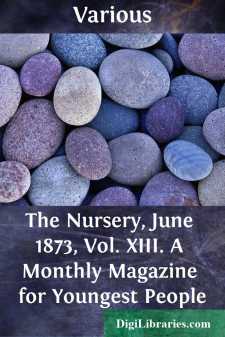 THE CHILDREN AT GRANDMOTHER'S.   HERE was once a grandmother who had fourteen little grandchildren. Some of them were cousins to one another; and some were brothers and sisters. This grandmother lived in an old, old cottage not far from the sea-beach. The cottage had a long sloping roof; and there was an elm-tree in front of it.

One fair day in June, the boys went down to the sea-beach to bathe, and the girls went out on the lawn to play. Some of them thought they would play "hunt the slipper."

But little Emma Darton, who was a cousin to the rest, said, "I promised my mother I would not sit down on the grass: so, if you play 'hunt the slipper,' I must not play with you; for in that game you have to sit."

Then her Cousin Julia replied, "Nonsense, Emma! It is a bright warm day. Don't you see the grass is quite dry? Come, you must not act and talk like an old woman of sixty. Come and join in our game."

But Emma said, "When I make a promise, I always try to keep it. If to do that is to be like an old woman of sixty, then I am glad I am like one."

"You are the oldest-talking little witch I ever knew for a five-year-old," cried Julia. "If you don't look out, you'll not live half your days."

"I think Emma is right," said Marian, another cousin. "So, if you insist on sitting on the grass, Emma and I will go and sit by ourselves on the trunk of the old fallen tree."

But Julia insisted on having her game of "hunt the slipper;" and Emma and Marian went and sat down on the fallen trunk, and looked on while the rest played.

"Why, what is the matter with you, children?" said the old lady. "If I did not know you were sensible little girls, I should say you had been sitting on the damp grass,—all of you but Emma and Marian."

The cousins looked at one another; but no one spoke aloud. Then Marian whispered to Emma, "Are you not glad you kept your promise to your mother?"

Emma looked up and smiled, but did not say a word.

One day last winter I was cutting maple-logs in the woods with a cross-cut saw. It was about five feet long, and had a handle at each end, so as to be used by two persons together. My brother generally helped me; but, for some reason, he was not with me then, and I was at work all by myself in a rather lonesome place.

I had finished eating my dinner, set my pail under a clump of trees, and commenced my afternoon job; but, as the log was large and hard, I often had to stop and rest a minute. While I was standing still, with my hands upon one handle of the saw, all at once a bird came flying down towards me; and, after resting upon the ground behind the log a few moments, what do you suppose he did?

Whether he knew I was tired, and thought it was too hard for me to cut the wood all alone, I cannot say; but suddenly he gave a little spring, and seated himself right on the other handle of my saw, as you see in the picture, grasping it with all the hands he had, and looking as though he had come on purpose to help me saw that log through.