The Nursery, January 1877, Volume XXI, No. 1 A Monthly Magazine for Youngest Readers 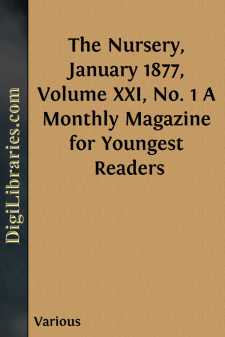 WORK AND PLAY.   O you want your sidewalk shovelled?" This was the question asked of Mr. Prim, as he sat reading his newspaper, one New Year's morning. The question came through a servant who had just answered the door-bell. Mr. Prim looked out of the window. The snow was still falling. So he sent out word, "No shovelling wanted till the storm's over," and went on with his reading.

By and by there was another ring at the door; and in a moment the servant-girl came in, saying, "The snow-shovellers are here again, sir, and they want to see you."

Mr. Prim stepped out into the entry, where he found two rough-looking boys, both of whom greeted him at once with, "Wish you a happy new year! Please, sir, it's done snowing now."

"That means," said Mr. Prim, "that you both want the job of clearing off the sidewalk; but which am I to give it to?"

"Oh, sir!" said the bigger boy, "we are partners. I shovel, and Mike sweeps."

"And what are your names?"

"Mine is Tom Murphy, and his is Mike Flynn."

"That's it," said both boys with a grin.

"Well, Murphy & Flynn, I will employ you to do my shovelling to-day, and I will give you fifty cents for the job; but I am very particular. You must not leave a bit of snow anywhere about the steps or sidewalk."

"All right, sir," said the boys; and they went to work, while Mr. Prim went back to his newspaper. He had not been reading many minutes, when a loud shout in front of the house led him to look out of the window. The picture shows what he saw.

There were the two boys, each mounted on one of the stone lions at the head of the steps, and shouting at the top of his lungs in the excitement of an imaginary race.

Mr. Prim was first astonished, then angry, then amused, at this performance. He opened the window, and called out sharply, "Look here, boys! do you call that work, or play?"

The boys jumped down, and began to ply their broom and shovel with great vigor. But Murphy looked up roguishly, and said, "We were just polishing off the lions, sir."

"Yes," said Mr. Prim, "and a paroxysm of fun got the better of you. Well, it's excusable on New Year's Day. But, if the firm of Murphy & Flynn expect to succeed in business, they must not mix so much play with their work." And Mr. Prim shut the window.

"That's more than I can tell," said Mike. "I can't remember such hard words. But I know what he meant, and I guess he was about right."

Uncle Sam.     BUMBLE-BEE.   Bumble-Bee superbly dressed,In velvet, jet, and gold,Sailed along in eager quest,And hummed a ballad bold.Morning-Glory clinging tightTo friendly spires of grass,Blushing in the early light,Looked out to see him pass.Nectar pure as crystal layIn her ruby cup;Bee was very glad to stay,Just to drink it up."Fairest of the flowers," said he,"'Twas a precious boon;May you still a Glory be,Morning, night, and noon!" M....
Show more
Show less