The Number Concept Its Origin and Development 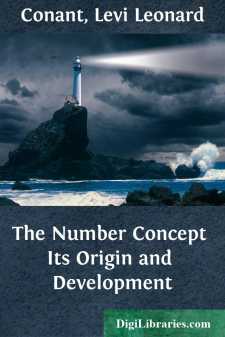 Among the barbarous tribes whose languages have been studied, even in a most cursory manner, none have ever been discovered which did not show some familiarity with the number concept. The knowledge thus indicated has often proved to be most limited; not extending beyond the numbers 1 and 2, or 1, 2, and 3. Examples of this poverty of number knowledge are found among the forest tribes of Brazil, the native races of Australia and elsewhere, and they are considered in some detail in the next chapter. At first thought it seems quite inconceivable that any human being should be destitute of the power of counting beyond 2. But such is the case; and in a few instances languages have been found to be absolutely destitute of pure numeral words. The Chiquitos of Bolivia had no real numerals whatever, but expressed their idea for “one” by the word etama, meaning alone. The Tacanas of the same country have no numerals except those borrowed from Spanish, or from Aymara or Peno, languages with which they have long been in contact. A few other South American languages are almost equally destitute of numeral words. But even here, rudimentary as the number sense undoubtedly is, it is not wholly lacking; and some indirect expression, or some form of circumlocution, shows a conception of the difference between one and two, or at least, between one and many.

These facts must of necessity deter the mathematician from seeking to push his investigation too far back toward the very origin of number. Philosophers have endeavoured to establish certain propositions concerning this subject, but, as might have been expected, have failed to reach any common ground of agreement. Whewell has maintained that “such propositions as that two and three make five are necessary truths, containing in them an element of certainty beyond that which mere experience can give.” Mill, on the other hand, argues that any such statement merely expresses a truth derived from early and constant experience; and in this view he is heartily supported by Tylor. But why this question should provoke controversy, it is difficult for the mathematician to understand. Either view would seem to be correct, according to the standpoint from which the question is approached. We know of no language in which the suggestion of number does not appear, and we must admit that the words which give expression to the number sense would be among the early words to be formed in any language. They express ideas which are, at first, wholly concrete, which are of the greatest possible simplicity, and which seem in many ways to be clearly understood, even by the higher orders of the brute creation. The origin of number would in itself, then, appear to lie beyond the proper limits of inquiry; and the primitive conception of number to be fundamental with human thought.

In connection with the assertion that the idea of number seems to be understood by the higher orders of animals, the following brief quotation from a paper by Sir John Lubbock may not be out of place: “Leroy … mentions a case in which a man was anxious to shoot a crow. ‘To deceive this suspicious bird, the plan was hit upon of sending two men to the watch house, one of whom passed on, while the other remained; but the crow counted and kept her distance. The next day three went, and again she perceived that only two retired. In fine, it was found necessary to send five or six men to the watch house to put her out in her calculation. The crow, thinking that this number of men had passed by, lost no time in returning.’ From this he inferred that crows could count up to four. Lichtenberg mentions a nightingale which was said to count up to three. Every day he gave it three mealworms, one at a time. When it had finished one it returned for another, but after the third it knew that the feast was over.… There is an amusing and suggestive remark in Mr. Galton's interesting Narrative of an Explorer in Tropical South Africa. After describing the Demara's weakness in calculations, he says: ‘Once while I watched a Demara floundering hopelessly in a calculation on one side of me, I observed, “Dinah,” my spaniel, equally embarrassed on the other; she was overlooking half a dozen of her new-born puppies, which had been removed two or three times from her, and her anxiety was excessive, as she tried to find out if they were all present, or if any were still missing....