The Norwegian account of Haco's expedition against Scotland, A.D. MCCLXIII. 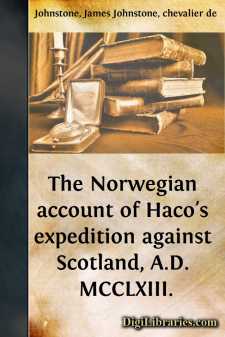 Alexander King of Scotland, wished much for possession of the Hebrides. He had often sent to Norway to redeem them with money, and he did so this summer. But when he could not purchase those territories of King Haco, he took other measures in hand, which were not princely. Collecting forces throughout all Scotland, he prepared for a voyage to the Hebrides, and determined to subdue those islands under his dominion. He made it manifest before his subjects, that he would not desist till he had set his standard east on the cliffs of Thurso, and had reduced under himself all the provinces which the Norwegian Monarch possessed to the westward of the German Ocean.

King Alexander sent word to John King of the isles that he wished to see him. But King John would not meet the Scottish King till four Earls of Scotland had pledged their honour, that he should return in safety, whether any agreement was made or not. When the Kings met, the Scottish Monarch besought King John, that he would give up Kiarnaburgh into his power, and three other Castles which he held of King Haco; as also the other lands which King Haco had conferred upon him. The Scottish King added, that, if he would join him in good earnest, he would reward him with many greater estates in Scotland, together with his confidence and favour. All King John's Relations and Friends pressed him to assent. But he behaved well, and uprightly; and declared that he would not break his oath to King Haco. On this King John went away, and stopped not at any place till he came quite north to Lewes.

King Alexander, then lying in Kiararey-sound, dreamed a dream, and thought three men came to him. He thought one of them was in royal robes, but very stern, ruddy in countenance, somewhat thick, and of middling size. Another seemed of a slender make, but active, and of all men the most engaging, and majestic. The third again, was of very great stature, but his features were distorted, and of all the rest he was the most unsightly. They addressed their speech to the King, and enquired whether he meant to invade the Hebrides. Alexander thought he answered that he certainly proposed to subject the islands. The Genius of the vision bade him go back; and told him no other measure would turn out to his advantage. The King related his dream; and many advised him to return. But the King would not; and a little after he was seized with a disorder, and died. The Scottish army then broke up; and they removed the King's body to Scotland. The Hebridians say that the men whom the King saw in his sleep were St Olave King of Norway, St Magnus Earl of Orkney, and St Columba.

The Scotch took for their King Alexander the son of King Alexander. He afterwards married the daughter of Henry King of England, and became a great prince.

In summer there came, from Scotland in the west, an Archdeacon, and a knight called Missel, as Envoys from Alexander King of Scotland. They shewed more fair language than truth, as seemed to King Haco. They set out so abruptly on their return, that none wist till they were under sail. The King dispatched Briniolf Johnson in pursuit, and he detained them with him. The King declared that they should remain that winter in Norway, because they had gone away without taking leave, contrary to what other Envoys did.

In summer there came letters from the Kings of the Hebrides in the western seas. They complain'd much of the hostilities which the Earl of Ross, Kiarnach, the son of Mac-camal, and other Scots committed in the Hebrides when they went out to Sky. They burned villages, and churches, and they killed great numbers both of men and women....