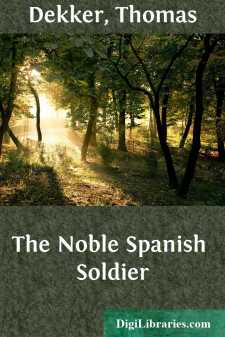 Thomas Dekker is believed to have been born in London around 1572, but nothing is known for certain about his youth. He embarked on a career as a theatre writer early in his adult life, the first extant text of his work being 'Old Fortunatus' written around 1596, although there are plays connected with his name which were performed as early as 1594. The period from 1596 to 1602 was the most prolific of his career, with 20 plays being attributed to him and an involvement in up to 28 other plays being suggested. It was during this period that he produced his most famous work, 'The Shoemaker's Holiday, or the Gentle Craft', categorised by modern critics as citizen comedy, it reflects his concerns with the daily lives of ordinary Londoners. This play exemplifies his vivid use of language and the intermingling of everyday subjects with the fantastical, embodied in this case by the rise of a craftsman to Mayor and the involvement of an unnamed but idealised king in the concluding banquet.

He exhibited a similar vigour in such prose pamphlets as the ironically entitled 'The Wonderfull Yeare' (1603), about the plague, 'The Belman of London' (1608), about roguery and crime, and 'The Guls Horne-Booke' (1609), a valuable account of behaviour in the London theatres.

Dekker was partly responsible for devising the street entertainment to celebrate the entry of James I into London in 1603 and he managed the Lord Mayor's pageant in 1612. His fortunes took a turn for the worse shortly after, when between 1613 and 1619 he was imprisoned, probably for debt; this experience may be behind his six prison scenes first included in the sixth edition (1616) of Sir Thomas Overbury's 'Characters'. He died in 1632 and was buried at St James', Clerkenwell.

The first clear reference to the play is dated as 16 May 1631 when an entry was made in the Stationer's Register, effectively licensing texts for publication. The entry, made for John Jackman, referred to manuscripts of two plays by 'Tho: Dekker', these being 'The Wonder of a Kingdom' and 'a Tragedy called The Noble Spanish Soldier'. A similar entry was made on 9 December 1633, this time for Nicholas Vavasour. The play was printed in a quarto version in 1634, probably by John Beale, on behalf of Vavasour, who initialled the foreword entitled 'The Printer to The Reader'.

These aspects of the play have attracted more critical attention than all others combined, reference frequently being made to the following known facts:

(1) Although the entries in the Stationer's Register refer unambiguously to Dekker as the author, the title page of the Quarto states that the play is written by 'S.R.', the only Jacobean playwright with those initials being Samuel Rowley.

(2) It has been observed, initially by nineteenth century scholar A. H. Bullen, that three sections of a play by John Day called 'The Parliament of Bees' are nearly identical to sections of NSS....