The Nile tributaries of Abyssinia, and the sword hunters of the Hamran arabs 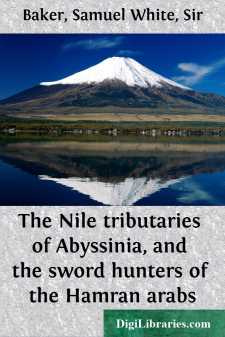 We now enjoyed the contrast between the light active step of first-class hygeens, and the heavy swinging action of the camels we had hitherto ridden. Travelling was for the first time a pleasure; there was a delightful movement in the elasticity of the hygeens, who ambled at about five miles and a half an hour, as their natural pace; this they can continue for nine or ten hours without fatigue. Having no care for the luggage, and the coffee-pot being slung upon the saddle of an attendant, who also carried our carpet, we were perfectly independent, as we were prepared with the usual luxuries upon halting,—the carpet to recline upon beneath a shady tree, and a cup of good Turkish coffee. Thus we could afford to travel at a rapid rate, and await the arrival of the baggage-camels at the end of the day's journey. In this manner the march should be arranged in these wild countries, where there is no resting-place upon the path beyond the first inviting shade that suggests a halt. The day's journey should be about twenty-four miles. A loaded camel seldom exceeds two miles and a half per hour; at this rate nearly ten hours would be consumed upon the road daily, during which time the traveller would be exposed to the intense heat of the sun, and to the fatigue inseparable from a long and slow march. A servant mounted upon a good hygeen should accompany him with the coffee apparatus and a cold roast fowl and biscuits; the ever necessary carpet should form the cover to his saddle, to be ready when required; he then rides far in advance of the caravan. This simple arrangement insures comfort, and lessens the ennui of the journey; the baggage-camels are left in charge of responsible servants, to be brought forward at their usual pace, until they shall arrive at the place selected for the halt by the traveller. The usual hour of starting is about 5.30 A.M. The entire day's journey can be accomplished in something under five hours upon hygeens, instead of the ten hours dreary pace of the caravan; thus, the final halt would be made at about 10.30 A.M. at which time the traveller would be ready for breakfast. The carpet would be spread under a shady tree; upon a branch of this his water-skin should be suspended, and the day's work over, he can write up his journal and enjoy his pipe while coffee is being prepared. After breakfast he can take his gun or rifle and explore the neighbourhood, until the baggage-camels shall arrive in the evening, by which time, if he is a sportsman, he will have procured something for the dinner of the entire party. The servants will have collected firewood, and all will be ready for the arrival of the caravan, without the confusion and bustle of a general scramble, inseparable from the work to be suddenly performed, when camels must be unloaded, fuel collected, fires lighted, the meals prepared, beds made, &c. &c. all at the same moment, with the chance of little to eat. Nothing keeps the camel-drivers and attendants in such good humour as a successful rifle. While they are on their long and slow march, they speculate upon the good luck that may attend the master's gun, and upon arrival at the general bivouac in the evening they are always on the alert to skin and divide the antelopes, pluck the guinea-fowls, &c. &c. We now travelled in this delightful manner; there were great numbers of guinea-fowl throughout the country, which was the same everlasting flat and rich table land, extending for several hundred miles to the south, and dotted with green mimosas; while upon our left was the broken valley of the Atbara.

The only drawback to the journey was the rain. At about 2 P.M. daily we were subjected to a violent storm, which generally lasted until the evening; and although our guides invariably hurried forward on the march to the neighbourhood of some deserted huts, whose occupants had migrated north, our baggage and servants upon the road were exposed to the storm, and arrived late in the evening, wet and miserable. There could be no doubt that the season for travelling was past. Every day's journey south had proved by the increased vegetation that we were invading the rainy zone, and that, although the northern deserts possessed their horrors of sandy desolation, they at the same time afforded that great advantage to the traveller, a dry climate.

In a few rapid marches we arrived at Tomat, the commencement of the Dabainas and the principal head-quarters of the sheik of that tribe, Atalan Wat Said. This was a lovely spot, where the country appeared like green velvet, as the delicate young grass was about two inches above the ground. The Arab camp was situated upon a series of knolls about a hundred and fifty feet above the Atbara, upon the hard ground denuded by the rains, as this formed a portion of the valley. At this spot, the valley on the west bank of the river was about two miles broad, and exhibited the usual features of innumerable knolls, ravines, and landslips, in succession, like broken terraces from the high level table land, sloping down irregularly to the water's edge. On the opposite side of the river was the most important feature of the country; the land on the east bank was considerably higher than upon the west, and a long tongue formed a bluff cliff that divided the Atbara valley from the sister valley of the Settite, which, corresponding exactly in character and apparent dimensions, joined that of the Atbara from the S.E., forming an angle like the letter V, in a sudden bend of the river. Through the valley of the eastern bank flowed the grand river Settite, which here formed a junction with the Atbara.

Looking down upon the beautifully wooded banks of the two rivers at this interesting point, we rode leisurely across a ravine, and ascended a steep incline of bright green grass, upon the summit of which was a fine level space of several acres that formed the Arab head-quarters. This surface was nearly covered with the usual mat tents, and in a few moments our camels knelt before that of the sheik, at which we dismounted. A crowd of inquisitive Arabs surrounded us upon seeing so large a party of hygeens, and the firman having been delivered by our guide, Sheik Ali, we were almost immediately visited by Sheik Atalan Wat Said. He was a man in the prime of life, of an intelligent countenance, and he received us with much politeness, immediately ordering a fat sheep to be brought and slaughtered for our acceptance.

The usual welcome upon the arrival of a traveller, who is well received in an Arab camp, is the sacrifice of a fat sheep, that should be slaughtered at the door of his hut or tent, so that the blood flows to the threshold....