The New Testament Translated From the Original Greek, With Chronological Arrangement of the Sacred Books, and Improved Divisions of Chapters and Verses. 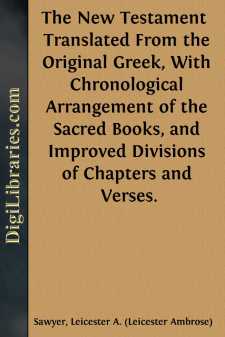 THIS is not a work of compromises, or of conjectural interpretations of the sacred Scriptures, neither is it a paraphrase, but a strict literal rendering. It neither adds nor takes away; but aims to express the original with the utmost clearness, and force, and with the utmost precision. It adopts, however, except in the prayers, a thoroughly modern style, and makes freely whatever changes are necessary for this purpose.

Besides being a contribution to Biblical science, it is designed to be a still more important contribution to practical religion, for which the Bible in its original languages and in all its translations is chiefly valuable. The translation depends mainly on its superior adaptation to this end, under the blessing of God, for its success and usefulness. If it shall be found on trial to be a superior instrument of piety and virtue, it will doubtless meet with favor and do good. The ascendency of practical religion is not so general or complete, that any additional help for its promotion can be deemed unnecessary.

New translations of the Scriptures are generally introduced with apologies and received with caution and distrust. In many cases men have resisted them as dangerous innovations, and attempted to exterminate them with fire and sword. This was the case with the translations of Wickliffe and of Tindal. But truth and the kind providence of God were too mighty for their enemies, and these translations lived to see their persecutors in the dust, and to laugh them to scorn. Wickliffe's translation was published in 1380, in a dark age. Many good men anticipated from it the greatest calamities, and resisted it with the most intemperate zeal, and every species of denunciation was used against it. It was made from the Vulgate, and not from the Greek and Hebrew, and was imperfect; but it was a great improvement on what existed before, and it proved a great blessing.

Tindal was contemporary with Luther, and undertook to give a new translation of the Bible to England, as Luther did to Germany. He completed his New Testament against the greatest opposition, and published it in 1526, and was engaged on the Old Testament, when he was arrested, imprisoned a year, and then brought to the stake and strangled and burnt, at the age of fifty-nine, A.D. 1536. He was the morning star of the Reformation in England, and became by his translation of the New Testament and a part of the Old, and by the interest he excited in the subject of improved translations in England, one of the great benefactors of his race. He was a man of great gentleness, kindness, simplicity of character, and benevolence, and his life is without a stain. Coverdale translated the whole Bible, and published it in 1535 while Tindal was in prison waiting for his crown of martyrdom. Several other translations followed, and that of King James last of all, in 1611.

King James's translation was made by forty-seven translators, divided into six companies, and laboring on their work three years....