The New Testament of our Lord and Savior Jesus Christ. The common English version, corrected by the final committee of the American Bible Union. 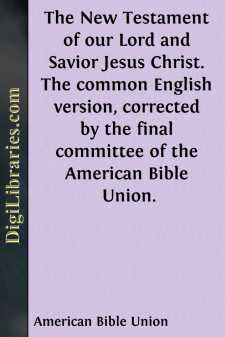 THE GOSPEL ACCORDING TO MATTHEW.

I.  Book of the generation of Jesus Christ, son of David, son of Abraham. 2Abraham begot Isaac; and Isaac begot Jacob; and Jacob begot Judah and his brothers; 3and Judah begot Pharez and Zarah, of Tamar; and Pharez begot Hezron; and Hezron begot Ram; 4and Ram begot Amminadab; and Amminadab begot Nahshon; and Nahshon begot Salmon; 5and Salmon begot Boaz, of Rahab; and Boaz begot Obed, of Ruth; and Obed begot Jesse; 6and Jesse begot David the king; and David begot Solomon, of the wife of Uriah; 7and Solomon begot Rehoboam; and Rehoboam begot Abijah; and Abijah begot Asa; 8and Asa begot Jehoshaphat; and Jehoshaphat begot Joram; and Joram begot Uzziah; 9and Uzziah begot Jotham; and Jotham begot Ahaz; and Ahaz begot Hezekiah; 10and Hezekiah begot Manasseh; and Manasseh begot Amon; and Amon begot Josiah; 11and Josiah begot Jeconiah and his brothers, at the time of the removal to Babylon. 12And after the removal to Babylon, Jeconiah begot Salathiel; and Salathiel begot Zerubbabel; 13and Zerubbabel begot Abiud; and Abiud begot Eliakim; and Eliakim begot Azor; 14and Azor begot Zadock; and Zadock begot Achim; and Achim begot Eliud; 15and Eliud begot Eleazar; and Eleazar begot Matthan; and Matthan begot Jacob; 16and Jacob begot Joseph the husband of Mary, of whom was born Jesus, who is called Christ.

18Now the birth of Jesus Christ was after this manner. His mother Mary having been betrothed to Joseph, before they came together she was found with child by the Holy Spirit. 19And Joseph her husband, being just, and not willing to expose her openly, desired to put her away privately. 20But while he thought on these things, behold, an angel of the Lord appeared to him in a dream, saying: Joseph, son of David, fear not to take to thee Mary thy wife; for that which is begotten in her is of the Holy Spirit. 21And she shall bring forth a son, and thou shalt call his name Jesus; for he shall save his people from their sins.

22And all this has come to pass, that it might be fulfilled which was spoken by the Lord through the prophet, saying:

23Behold, the virgin shall be with child,

And shall bring forth a son,

And they shall call his name Immanuel;

which is interpreted, God with us.

24And Joseph, awaking from sleep, did as the angel of the Lord bade him, and took to him his wife; 25and he knew her not till she brought forth a son; and he called his name Jesus.

II.  And Jesus having been born in Bethlehem of Judæa, in the days of Herod the king, behold, there came wise men from the east to Jerusalem, 2saying: Where is he that is born King of the Jews? For we saw his star in the east, and came to do him homage. 3And the king, Herod, hearing it, was troubled, and all Jerusalem with him. 4And having assembled all the chief priests and scribes of the people, he inquired of them where the Christ should be born....