The New South A Chronicle of Social and Industrial Evolution 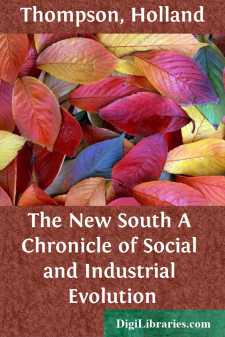 CHAPTER I THE BACKGROUND

The South of today is not the South of 1860 or even of 1865. There is a New South, though not perhaps in the sense usually understood, for no expression has been more often misused in superficial discussion. Men have written as if the phrase indicated a new land and a new civilization, utterly unlike anything that had existed before and involving a sharp break with the history and the traditions of the past. Nothing could be more untrue. Peoples do not in one generation or in two rid themselves entirely of characteristics which have been developing for centuries.

There is a New South, but it is a logical development from the Old South. The civilization of the South today has not been imposed from without but has been an evolution from within, though influenced by the policy of the National Government. The Civil War changed the whole organization of Southern society, it is true, but it did not modify its essential attributes, to quote the ablest of the carpetbaggers, Albion W. Tourgée. Reconstruction strengthened existing prejudices and created new bitterness, but the attempt failed to make of South Carolina another Massachusetts. The people resisted stubbornly, desperately, and in the end successfully, every attempt to impose upon them alien institutions.

The story of Reconstruction has been told elsewhere.[1] A combination of two ideas—high-minded altruism and a vindictive desire to humiliate a proud people for partisan advantage—wrought mischief which has not been repaired in nearly half a century. It is to be doubted, however, whether Reconstruction actually changed in any essential point the beliefs of the South. Left to itself, the South would not, after the War, have given the vote to the negro. When left to itself still later, it took the ballot away. The South would not normally have accepted the negro as a social equal. The attempt to force the barrier between the races by legislation with the aid of bayonets failed. Without the taste of power during the Reconstruction period, the black South would not have demanded so much and the determination of the white South to dominate would not perhaps have been expressed so bitterly; but in any case the white South would have dominated.

[Footnote 1: See The Sequel of Appomattox, by Walter Lynwood Fleming (in The Chronicles of America).]

Economic and industrial development was hindered by Reconstruction. Men of vision had seen before the War that the South must become more nearly self-sufficient; and the results of the conflict had emphasized this idea. The South believed, and believes yet, that it was defeated by the blockade and not by military force. According to this theory, the North won because the South could not manufacture goods for its needs, because it did not possess ships to bring in goods from abroad, and because it could not build a navy to defend its ports. Today it is clear that the South never had a chance to win, so long as the will to conquer was firm in the North....