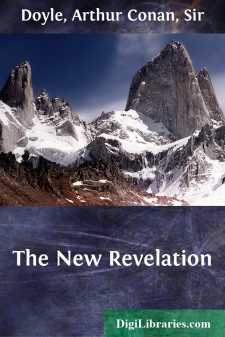 CHAPTER I. THE SEARCH

The subject of psychical research is one upon which I have thought more and about which I have been slower to form my opinion, than upon any other subject whatever. Every now and then as one jogs along through life some small incident happens which very forcibly brings home the fact that time passes and that first youth and then middle age are slipping away. Such a one occurred the other day. There is a column in that excellent little paper, Light, which is devoted to what was recorded on the corresponding date a generation—that is thirty years—ago. As I read over this column recently I had quite a start as I saw my own name, and read the reprint of a letter which I had written in 1887, detailing some interesting spiritual experience which had occurred in a seance. Thus it is manifest that my interest in the subject is of some standing, and also, since it is only within the last year or two that I have finally declared myself to be satisfied with the evidence, that I have not been hasty in forming my opinion. If I set down some of my experiences and difficulties my readers will not, I hope, think it egotistical upon my part, but will realise that it is the most graphic way in which to sketch out the points which are likely to occur to any other inquirer. When I have passed over this ground, it will be possible to get on to something more general and impersonal in its nature.

When I had finished my medical education in 1882, I found myself, like many young medical men, a convinced materialist as regards our personal destiny. I had never ceased to be an earnest theist, because it seemed to me that Napoleon's question to the atheistic professors on the starry night as he voyaged to Egypt: "Who was it, gentlemen, who made these stars?" has never been answered. To say that the Universe was made by immutable laws only put the question one degree further back as to who made the laws. I did not, of course, believe in an anthropomorphic God, but I believed then, as I believe now, in an intelligent Force behind all the operations of Nature—a force so infinitely complex and great that my finite brain could get no further than its existence. Right and wrong I saw also as great obvious facts which needed no divine revelation. But when it came to a question of our little personalities surviving death, it seemed to me that the whole analogy of Nature was against it. When the candle burns out the light disappears. When the electric cell is shattered the current stops. When the body dissolves there is an end of the matter. Each man in his egotism may feel that he ought to survive, but let him look, we will say, at the average loafer—of high or low degree—would anyone contend that there was any obvious reason why THAT personality should carry on? It seemed to be a delusion, and I was convinced that death did indeed end all, though I saw no reason why that should affect our duty towards humanity during our transitory existence.

This was my frame of mind when Spiritual phenomena first came before my notice....