The New Physics and Its Evolution 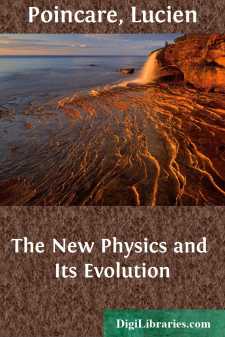 THE EVOLUTION OF PHYSICS

The now numerous public which tries with some success to keep abreast of the movement in science, from seeing its mental habits every day upset, and from occasionally witnessing unexpected discoveries that produce a more lively sensation from their reaction on social life, is led to suppose that we live in a really exceptional epoch, scored by profound crises and illustrated by extraordinary discoveries, whose singularity surpasses everything known in the past. Thus we often hear it said that physics, in particular, has of late years undergone a veritable revolution; that all its principles have been made new, that all the edifices constructed by our fathers have been overthrown, and that on the field thus cleared has sprung up the most abundant harvest that has ever enriched the domain of science.

It is in fact true that the crop becomes richer and more fruitful, thanks to the development of our laboratories, and that the quantity of seekers has considerably increased in all countries, while their quality has not diminished. We should be sustaining an absolute paradox, and at the same time committing a crying injustice, were we to contest the high importance of recent progress, and to seek to diminish the glory of contemporary physicists. Yet it may be as well not to give way to exaggerations, however pardonable, and to guard against facile illusions. On closer examination it will be seen that our predecessors might at several periods in history have conceived, as legitimately as ourselves, similar sentiments of scientific pride, and have felt that the world was about to appear to them transformed and under an aspect until then absolutely unknown.

Let us take an example which is salient enough; for, however arbitrary the conventional division of time may appear to a physicist's eyes, it is natural, when instituting a comparison between two epochs, to choose those which extend over a space of half a score of years, and are separated from each other by the gap of a century. Let us, then, go back a hundred years and examine what would have been the state of mind of an erudite amateur who had read and understood the chief publications on physical research between 1800 and 1810.

Let us suppose that this intelligent and attentive spectator witnessed in 1800 the discovery of the galvanic battery by Volta. He might from that moment have felt a presentiment that a prodigious transformation was about to occur in our mode of regarding electrical phenomena. Brought up in the ideas of Coulomb and Franklin, he might till then have imagined that electricity had unveiled nearly all its mysteries, when an entirely original apparatus suddenly gave birth to applications of the highest interest, and excited the blossoming of theories of immense philosophical extent.

In the treatises on physics published a little later, we find traces of the astonishment produced by this sudden revelation of a new world. "Electricity," wrote the Abbé Haüy, "enriched by the labour of so many distinguished physicists, seemed to have reached the term when a science has no further important steps before it, and only leaves to those who cultivate it the hope of confirming the discoveries of their predecessors, and of casting a brighter light on the truths revealed....