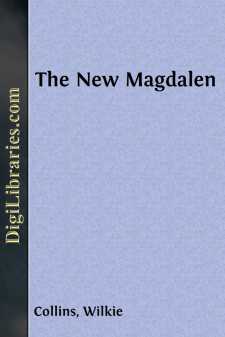 THE place is France.

The time is autumn, in the year eighteen hundred and seventy—the year of the war between France and Germany.

CHAPTER I. THE TWO WOMEN.

IT was a dark night. The rain was pouring in torrents.

Late in the evening a skirmishing party of the French and a skirmishing party of the Germans had met, by accident, near the little village of Lagrange, close to the German frontier. In the struggle that followed, the French had (for once) got the better of the enemy. For the time, at least, a few hundreds out of the host of the invaders had been forced back over the frontier. It was a trifling affair, occurring not long after the great German victory of Weissenbourg, and the newspapers took little or no notice of it.

Captain Arnault, commanding on the French side, sat alone in one of the cottages of the village, inhabited by the miller of the district. The Captain was reading, by the light of a solitary tallow-candle, some intercepted dispatches taken from the Germans. He had suffered the wood fire, scattered over the large open grate, to burn low; the red embers only faintly illuminated a part of the room. On the floor behind him lay some of the miller's empty sacks. In a corner opposite to him was the miller's solid walnut-wood bed. On the walls all around him were the miller's colored prints, representing a happy mixture of devotional and domestic subjects. A door of communication leading into the kitchen of the cottage had been torn from its hinges, and used to carry the men wounded in the skirmish from the field. They were now comfortably laid at rest in the kitchen, under the care of the French surgeon and the English nurse attached to the ambulance. A piece of coarse canvas screened the opening between the two rooms in place of the door. A second door, leading from the bed-chamber into the yard, was locked; and the wooden shutter protecting the one window of the room was carefully barred. Sentinels, doubled in number, were placed at all the outposts. The French commander had neglected no precaution which could reasonably insure for himself and for his men a quiet and comfortable night.

Still absorbed in his perusal of the dispatches, and now and then making notes of what he read by the help of writing materials placed at his side, Captain Arnault was interrupted by the appearance of an intruder in the room. Surgeon Surville, entering from the kitchen, drew aside the canvas screen, and approached the little round table at which his superior officer was sitting.

"What is it?" said the captain, sharply.

"A question to ask," replied the surgeon. "Are we safe for the night?"

"Why do you want to know?" inquired the captain, suspiciously.

The surgeon pointed to the kitchen, now the hospital devoted to the wounded men....