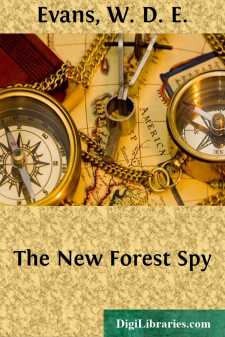 An Encounter in the Wood.

The lad who uttered those words dropped a short, stiff fishing-rod in amongst the bracken and furze, and made a dash in the direction of a sharp rustling sound to his right, ran as hard as he could, full-pelt, for about five-and-twenty yards, and then, catching his toe in a tough stem of heather, went headlong down into a tuft of closely-cropped furze—the delicate finer kind—which had been nibbled off year after year till it had assumed the form of a great green-and-gold cushion, beautiful to look at, but too pointed in its attentions to make a pleasant resting-place.

“Bother!” shouted the boy, as he scrambled up. “Oh, what an ass I am! Anyone would think I was old enough to know that I couldn’t catch a rabbit on the run, even if he had no hole among the hazel-stubbs. Hole? Hundreds, where he could dive down. Horrid, prickly things furzes are. That was a sharp one; but there, it hasn’t hurt much, only it makes one so jolly hot.”

He walked backward along the edge of the forest much more deliberately to stoop and pick up his rod.

“Yes, of course,” he grumbled, and he screwed up a rather good-looking young manly face into a grin of annoyance which shewed all his closely set white teeth; “I might have known—all in a tangle. The hook broken, of course!”

He let the butt of the rod which bore a very old-fashioned brass winch, rest in the hollow of his arm, while he carefully extricated the hook at the end of his line from where it had fallen and caught hold of a stem of dwarf bracken, while to free it and the hair, feather, and dubbing which had transformed the said hook into what was supposed to be a big artificial fly, although it was not in the slightest degree like any insect that ever flew, required no little care.

“Humph!” he grunted; “might have been worse. But what a stupid a trout must be to go at a thing like that! Well, so much the better for me. Now then: once more, to begin.”

But the boy seemed in no hurry to start. His exertions, though slight, had made him very hot, and he took off his cap to wipe away the shining drops that covered his sun-tanned forehead and stood thickly where, higher up, the skin was white amongst the thickly set curls of his brown hair.

He looked round at a common-like portion of the New Forest over a slightly undulating stretch of velvety grass, bracken, heather and stunted oak-trees, which gave the place a park-like aspect, running right up to where the oaks were clustered thickly, with an occasional silvery or ruddy barked birch, and made dense with hazel-stubbs and alder.

It was, for the autumn sun shone down out of a vivid blue sky upon the gloriously green growth which was beginning here and there to look mellow and ripe as if shot with ruddy gold.

“I might just as well lie down and read under the shade of one of the trees,” mused the boy, “for the trout will be all in the most cranky places right under the stones and roots....