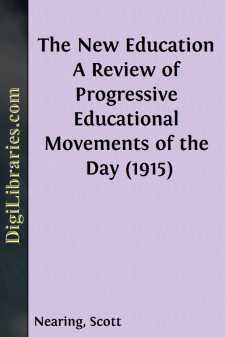 During 1910, 1911, and 1912, as a part of a general plan to write a book on education, I reread a great deal of the classical educational literature, and carefully perused most of the current material in magazine and book form. An interest aroused by undergraduate and graduate work in the department of pedagogy had been whetted by the revolutionary activity in every field of educational endeavor. The time seemed ripe for an effective piece of constructive educational writing, yet I could not see my way clear to begin it. Glaring faults there were; remedies appeared ready at hand and easy of application; the will of an aroused public opinion alone seemed to be lacking. By what method could this wheel horse of reform best be harnessed to the car of educational progress?

I was still seeking for an answer to this riddle when the editors of “The Ladies’ Home Journal” asked me to consider the preparation of a series of articles. “We have done some sharp destructive work in our criticisms of the schools,” they said. “Now we are going to do some constructive writing. We are in search of two things:—first, a constructive article outlining in general a possible scheme for reorganizing the course of study; second, a series of articles describing in a readable way the most successful public school work now being done in the United States. We want you to visit the schools, study them at first-hand, and bring back a report of the best that they have to offer. When your investigation is completed, we shall expect you to write the material up in such a form that each reader, after finishing an article, will exclaim,— is something that we must introduce into our schools.’”

That was my opportunity. Instead of writing a book to be read by a thousand persons, I could place a number of constructive articles before two million readers. The invitation was a godsend.

The articles, when completed, formed a natural sequence. First there was the general article (Chapter 3) suggesting the reorganization. Then followed descriptions of the schools in which some such reorganizations had been effected. Prepared with the same point of view, the articles constituted an acceptable series, having a general object and a connecting idea running throughout. What more natural than to write a few words of introduction and conclusion, and put the whole in book form? The style of the articles has been changed somewhat, and considerable material has been added to them; but, in the main, they stand as they were written—simple descriptions of some of the most advanced school work now being done in the United States.

Looked at from any standpoint, this study is a collection of articles rather than a book, yet there is sufficient relation between the articles to give a measure of continuity to the thought which they convey. In no sense is the work pedagogical or theoretical. It is, on the contrary, a record of the impressions made on a traveler by a number of school systems and schools....