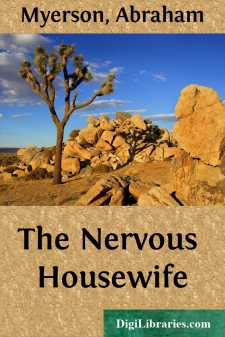 How old is the problem of the Nervous Housewife?

Did the semi-mythical Cave Man (who is perhaps only a pseudo-scientific creation) on his return from a prehistoric hunt find his leafy spouse all in tears over her staglocythic house-cleaning, or the conduct of the youngest cave child? Did she complain of her back, did she have a headache every time they disagreed, did she fuss and fret until he lost his patience and dashed madly out to the Cave Man's Refuge?

We cannot tell; we only know that all humor aside, and without reference to the past, the Nervous Housewife is surely a phenomenon of the present-day American home. In greater or less degree she is in every man's home; nor is she alone the rich Housewife with too little to do, for though riches do not protect, poverty predisposes, and the poor Housewife is far more frequently the victim of this disease of occupation. Every practicing physician, every hospital clinic, finds her a problem, evoking pity, concern, exasperation, and despair. She goes from specialist to specialist,—orthopedic surgeon, gynecologist, X-ray man, neurologist. By the time she has completed a course of treatment she has tasted all the drugs in the pharmacopeia, wears plates on her feet, spectacles on her nose, has had her teeth tinkered with, and her insides straightened; has had a course in hydrotherapeutics, electrotherapeutics, osteopathy, and Christian Science!

Such is an extreme case; the minor cases pass through life burdened with pains and aches of the body and soul. And one of the commonest and saddest of transformations is the change of the gay, laughing young girl, radiant with love and all aglow at the thought of union with her man, into the housewife of a decade,—complaining, fatigued, and disillusioned. Bound to her husband by the ties the years and the children have brought, there is a wall of misunderstanding between them.

"Men don't understand," cries she. "Women are unreasonable," says he.

What are the causes of the change? Did the housewife of a past generation go through the same stage? Ask any man you meet and he will tell you his mother is or was more enduring than his wife. "She bore three times as many children; she did all her own housework; she baked more, cooked more, sewed more; she got up at five o'clock in the morning and went to bed at ten at night; she never went out, never had a vacation, did not know the meaning of manicure, pedicure, coiffure. She was contented, never extravagant, and rarely sick."

So the average man will say, and then: "Those were the good old days of simple living, gone like the dodo!" To-day,—well, it reminds me of a joke I heard. One man meets another and says: 'By the way, I heard that your wife was the champion athlete at college.' 'Ah, yes,' said the husband; 'now she is too weak to wash the dishes.'

Is the average man's impression the correct one? Or are we dealing with the incorrigible disposition of man to glorify the past? To the majority of people their youth was an era of stronger, braver men, more wholesome, beautiful women. People were better, times were more natural, and there is a grim satisfaction in predicting that the "world is going to the dogs." "The good old days" has been the cry of man from the very earliest times.

Yet read what a contemporary of the housewife of three quarters of a century ago says,—the wisest, wittiest, sanest doctor of the day, Oliver Wendell Holmes. The genial autocrat of the breakfast table observes: "Talk about military duty! What is that to the warfare of a married maid of all work, with the title of mistress and an American female constitution which collapses just in the middle third of life, comes out vulcanized India rubber, if it happens to live through the period when health and strength are most wanted?"

And then, if one looks in the advertisements of half a century ago, one finds the nostrum dealer loudly proclaiming his capacity to cure what is evidently the Nervous Housewife....