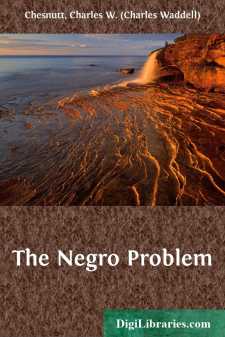 Industrial Education for the Negro By BOOKER T. WASHINGTON, Principal of Tuskegee Institute

The necessity for the race's learning the difference between being worked and working. He would not confine the Negro to industrial life, but believes that the very best service which any one can render to what is called the "higher education" is to teach the present generation to work and save. This will create the wealth from which alone can come leisure and the opportunity for higher education.

One of the most fundamental and far-reaching deeds that has been accomplished during the last quarter of a century has been that by which the Negro has been helped to find himself and to learn the secrets of civilization—to learn that there are a few simple, cardinal principles upon which a race must start its upward course, unless it would fail, and its last estate be worse than its first.

It has been necessary for the Negro to learn the difference between being worked and working—to learn that being worked meant degradation, while working means civilization; that all forms of labor are honorable, and all forms of idleness disgraceful. It has been necessary for him to learn that all races that have got upon their feet have done so largely by laying an economic foundation, and, in general, by beginning in a proper cultivation and ownership of the soil.

Forty years ago my race emerged from slavery into freedom. If, in too many cases, the Negro race began development at the wrong end, it was largely because neither white nor black properly understood the case. Nor is it any wonder that this was so, for never before in the history of the world had just such a problem been presented as that of the two races at the coming of freedom in this country.

For two hundred and fifty years, I believe the way for the redemption of the Negro was being prepared through industrial development. Through all those years the Southern white man did business with the Negro in a way that no one else has done business with him. In most cases if a Southern white man wanted a house built he consulted a Negro mechanic about the plan and about the actual building of the structure. If he wanted a suit of clothes made he went to a Negro tailor, and for shoes he went to a shoemaker of the same race. In a certain way every slave plantation in the South was an industrial school. On these plantations young colored men and women were constantly being trained not only as farmers but as carpenters, blacksmiths, wheelwrights, brick masons, engineers, cooks, laundresses, sewing women and housekeepers.

I do not mean in any way to apologize for the curse of slavery, which was a curse to both races, but in what I say about industrial training in slavery I am simply stating facts. This training was crude, and was given for selfish purposes. It did not answer the highest ends, because there was an absence of mental training in connection with the training of the hand. To a large degree, though, this business contact with the Southern white man, and the industrial training on the plantations, left the Negro at the close of the war in possession of nearly all the common and skilled labor in the South....