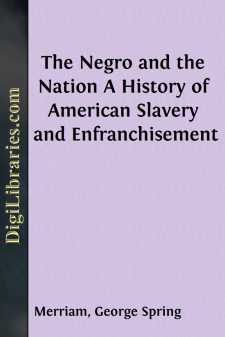 CHAPTER I HOW SLAVERY GREW IN AMERICA

An English traveler, riding along the banks of the Potomac in mid-July, 1798, saw ahead of him on the road an old-fashioned chaise, its driver urging forward his slow horse with the whip, until a sharp cut made the beast swerve, and the chaise toppled over the bank, throwing out the driver and the young lady who was with him. The traveler—it was John Bernard, an actor and a man of culture and accomplishments, spurred forward to the rescue. As he did so he saw another horseman put his horse from a trot to a gallop, and together they reached the scene of action, extricated the woman and revived her from her swoon with water from a brook; then righted the horse and chaise, helped to restore the half-ton of baggage to its place; learned the story of the couple—a New Englander returning home with his Southern bride—and saw them safely started again. Then the two rescuers, after their half-hour of perspiring toil in a broiling sun, addressed themselves courteously to each other; the Virginian dusted the coat of the Englishman, and as Mr. Bernard returned the favor he noticed him well,—"a tall, erect, well-made man, evidently advanced in years, but who appeared to have retained all the vigor and elasticity resulting from a life of temperance and exercise. His dress was a blue coat, buttoned to the chin, and buckskin breeches." The two men eyed each other, half recognizing, half perplexed, till with a smile the Virginian exclaimed, "Mr. Bernard, I believe?" and, claiming acquaintance from having seen him on the stage and heard of him from friends, invited him to come and rest at his house near by, to which he pointed. That familiar front, the now wholly familiar face and form,—"Mount Vernon! Have I the honor of addressing General Washington?" With a charming smile Washington offered his hand, replying, "An odd sort of introduction, Mr. Bernard; but I am pleased to find you can play so active a part in private and without a prompter." There followed a long and leisurely call at Mount Vernon, and Bernard, in his volume of travels which did not see the light for nearly a century, has given a most graphic and winning picture of Washington in his every-day aspect and familiar conversation. To the actor's keen eye, acquainted with the best society of his time, the near approach showed no derogation from the greatness which the story of his deeds conveyed. "Whether you surveyed his face, open yet well defined, dignified but not arrogant, thoughtful but benign; his frame, towering and muscular, but alert from its good proportions—every feature suggested a resemblance to the spirit it encased, and showed simplicity in alliance with the sublime. The impression, therefore, was that of a most perfect whole."

The talk ran a various course. Washington incidentally praised the New Englanders, "the stamina of the Union and its greatest benefactors." The Englishman acknowledged a tribute to his own country, but Washington with great good humor responded, "Yes, yes, Mr. Bernard, but I consider your country the cradle of free principles, not their arm-chair." He had proceeded a little way in a eulogy of American liberty, when a black servant entered the room with a jug of spring water. Bernard smiled, and Washington quickly caught his look and answered it: "This may seem a contradiction, but I think you must perceive that it is neither a crime nor an absurdity. When we profess, as our fundamental principle, that liberty is the inalienable right of every man, we do not include madmen or idiots; liberty in their hands would become a scourge. Till the mind of the slave has been educated to perceive what are the obligations of a state of freedom, and not confound a man's with a brute's, the gift would insure its abuse. We might as well be asked to pull down our old warehouses before trade has increased to demand enlarged new ones. Both houses and slaves were bequeathed to us by Europeans, and time alone can change them; an event which, you may believe me, no man desires more heartily than I do. Not only do I pray for it on the score of human dignity, but I can clearly foresee that nothing but the rooting out of slavery can perpetuate the existence of our Union, by consolidating it in a common bond of principle."

These words of Washington, with the incident that supplies their background, are an epitome of the view and attitude of that great man toward slavery. Before measuring their full significance, and the general situation in which this was an element, we may glance at the preliminary questions; how came slaves in Virginia and America; whence came slavery; what was it...?