The Naval History of the United States Volume 1 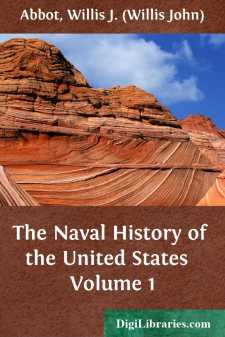 EARLY EXPLOITS UPON THE WATER. — GALLOP'S BATTLE WITH THE INDIANS. — BUCCANEERS AND PIRATES. — MORGAN AND BLACKBEARD. — CAPT. KIDD TURNS PIRATE. — DOWNFALL OF THE BUCCANEERS' POWER.

n May, 1636, a stanch little sloop of some twenty tons was standing along Long Island Sound on a trading expedition. At her helm stood John Gallop, a sturdy colonist, and a skilful seaman, who earned his bread by trading with the Indians that at that time thronged the shores of the Sound, and eagerly seized any opportunity to traffic with the white men from the colonies of Plymouth or New Amsterdam. The colonists sent out beads, knives, bright clothes, and sometimes, unfortunately, rum and other strong drinks. The Indians in exchange offered skins and peltries of all kinds; and, as their simple natures had not been schooled to nice calculations of values, the traffic was one of great profit to the more shrewd whites. But the trade was not without its perils. Though the Indians were simple, and little likely to drive hard bargains, yet they were savages, and little accustomed to nice distinctions between their own property and that of others. Their desires once aroused for some gaudy bit of cloth or shining glass, they were ready enough to steal it, often making their booty secure by the murder of the luckless trader. It so happened, that, just before John Gallop set out with his sloop on the spring trading cruise, the people of the colony were excitedly discussing the probable fate of one Oldham, who some weeks before had set out on a like errand, in a pinnace, with a crew of two white boys and two Indians, and had never returned. So when, on this May morning, Gallop, being forced to hug the shore by stormy weather, saw a small vessel lying at anchor in a cove, he immediately ran down nearer, to investigate. The crew of the sloop numbered two men and two boys, beside the skipper, Gallop. Some heavy duck-guns on board were no mean ordnance; and the New Englander determined to probe the mystery of Oldham's disappearance, though it might require some fighting. As the sloop bore down upon the anchored pinnace, Gallop found no lack of signs to arouse his suspicion. The rigging of the strange craft was loose, and seemed to have been cut. No lookout was visible, and she seemed to have been deserted; but a nearer view showed, lying on the deck of the pinnace, fourteen stalwart Indians, one of whom, catching sight of the approaching sloop, cut the anchor cable, and called to his companions to awake.

This action on the part of the Indians left Gallop no doubt as to their character. Evidently they had captured the pinnace, and had either murdered Oldham, or even then had him a prisoner in their midst. The daring sailor wasted no time in debate as to the proper course to pursue, but clapping all sail on his craft, soon brought her alongside the pinnace. As the sloop came up, the Indians opened the fight with fire-arms and spears; but Gallop's crew responded with their duck-guns with such vigor that the Indians deserted the decks, and fled below for shelter....