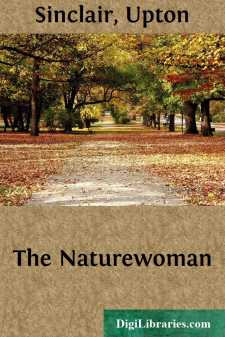 THE NATUREWOMAN ACT I

[Scene shows a luxuriously furnished drawing-room. Double doors, centre, opening to hall and stairway. Grand piano at right, fireplace next to it, with large easy-chair in front. Centre table; windows left, and chairs.]

[At rise: ETHEL standing by table; a beautiful but rather frail girl of sixteen; opening a package containing photograph in frame.]

ETHEL. Oceana! Oceana! [She gazes at it in rapture.] Oh, I wonder if she'll be as good as she is beautiful! She must be! Oceana! [To REMSON, an old, white-haired family servant, who enters with flowers in vase.] No message from my brother yet?

ETHEL. Look at this, Remson.

REMSON. [Takes photograph.] Is that your cousin, Miss Ethel?

ETHEL. That's she. Isn't she lovely?

REMSON. Yes, miss. Is that the way they dress in those parts?

ETHEL. The natives don't even wear that much, Remson.

REMSON. It must be right warm there, I fancy.

ETHEL. Oh, yes... they never know what cold weather is.

REMSON. What is the name of it, Miss Ethel?

ETHEL. Maukuri—it's in the South Seas.

REMSON. It seems like I've heard of cannibals in those parts, somewhere.

ETHEL, Yes, in some of the groups. But this is just one little island by itself... nothing else for a hundred miles and more.

REMSON. And she's lived there all this time, Miss Ethel?

REMSON. And no folks at all there?

ETHEL. Not since her father died.

REMSON. [Shakes his head.] Humph! She'd ought to be glad to get home, Miss Ethel.

ETHEL. She didn't seem to feel that way. [Takes book and seats herself by fireplace.] But we'll try to make her change her mind. Just think of it... she's been forty-six days on the steamer!

REMSON. Can it be possible, miss?

MRS. MASTERSON. Master Frederick is at the dock?

DR. MASTERSON. [Enters; slightly younger than his wife, a dapper little man, bald and henpecked.] No news from the steamer, my dear?

DR. MASTERSON. It'll be too bad if Oceana has to spend this evening on the steamer.

MRS. MASTERSON. Have you taken to calling her by that ridiculous name also?

DR. MASTERSON. Surely she has a right to select her name!

MRS. MASTERSON. I was present when she was christened; and so were you, Quincy. For ME she will remain Anna Talbot until the day she dies.

DR. MASTERSON. Anna or Oceana... there's not much difference, it seems. [Takes paper and sits by window; they do not see ETHEL.] Weren't Letitia and Henry to be here?

MRS. MASTERSON. Letitia was... but she's never on time. There's the bell now. [Looks at photograph.] Humph! So Ethel's had it framed! I declare... people ought not to be shown a photograph like that.....