The Natural History of Selborne, Vol. 1 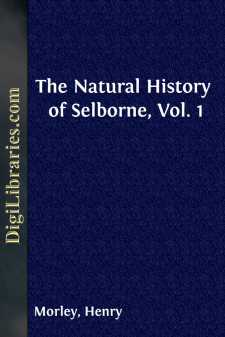 Gilbert White was born in the village of Selborne on the 18th of July, in the year 1720.  His father was a gentleman of good means, with a house at Selborne and some acres of land.  Gilbert had his school training at Basingstoke, from Thomas Warton, the father of the poet of that name, who was born at Basingstoke in 1728, six years younger than his brother Joseph, who had been born at Dunsford, in Surrey.  Thomas Warton, their father, was the youngest of three sons of a rector of Breamore, in the New Forest, and the only son of the three who was not deaf and dumb.  This Thomas, the elder, was an able man, who obtained a fellowship at Magdalen College, Oxford, became vicar of Basingstoke, in Hampshire, and was there headmaster of the school to which young Gilbert White was sent.  He was referred to in Amhurst’s “Terræ Filius” as “a reverend poetical gentleman;” he knew Pope, and had credit enough for his verse to hold the office of Professor of Poetry at Oxford from 1718 to 1728.  His genius for writing middling verse passed on to his more famous sons, Joseph and Thomas, and they both became in due time Oxford Professors of Poetry.

Gilbert White passed on from school to Oxford, where he entered Oriel College in 1739.  He became a Fellow of Oriel, graduated M.A. in 1746, at the age of six-and-twenty, and six years afterwards he served as one of the Senior Proctors of the University.  His love of nature grew with him from boyhood, and was associated with his earliest years of home.  His heart abided with his native village.  When he had taken holy orders he could have obtained college livings, but he cared only to go back to his native village, and the house in which he was born, paying a yearly visit to Oxford, and in that house, after a happy life that extended a few years over the threescore and ten, he died on the 26th of June, 1793.

Gilbert White never married, but lived in peaceful performance of light clerical duties and enjoyment of those observations of nature which his book records.  His brothers, who shared his love of nature, aided instead of thwarting him in his studies of the natural history of Selborne, and as their lives were less secluded and they did not remain unmarried, they provided him with a family of young people to care about, for he lived to register the births of sixty-three nephews and nieces.

It was one of his brothers, who was a member of the Royal Society, by whom Gilbert White was persuaded, towards the close of his life, to gather his notes into a book.  It was first published in a quarto volume in the year of the outbreak of the French Revolution with the fall of the Bastile.  He was more concerned with the course of events in a martin’s nest than with the crash of empires, and no man ever made more evident the latent power of enjoyment that is left dead by those who live uneventful lives surrounded by a world of life and change and growth which they want eyes to see.  Gilbert White was in his seventieth year when his book appeared, four years before his death.  It was compiled from letters addressed to Thomas Pennant and the Hon. Daines Barrington.

Thomas Pennant was a naturalist six years younger than Gilbert White.  He was born at Downing, in Flintshire, in 1726, and died in 1798, like White, in the house in which he had been born.  His love of Natural History made him a traveller at home and abroad.  He counted Buffon among his friends.  He had written many books before the date of the publication of White’s “Selborne.”  Pennant’s “British Zoology,” his “History of Quadrupeds” and “Arctic Zoology,” had a high reputation.  He wrote also a Tour in Wales and a History of London.

Daines Barrington, fourth son of the first Viscount Barrington, was a year younger than Pennant, and died in 1800.  He became Secretary to Greenwich Hospital, a Fellow of the Society of Antiquaries, and President of the Royal Society.  His “Miscellanies,” published in 4to in 1781, deal with questions of Natural History, and of Antiquities, including a paper first published in 1775 asserting the possibility of approaching the North Pole.  His most valued book was one of “Observations on the more Ancient Statutes.”