The Narrative of William W. Brown, a Fugitive Slave 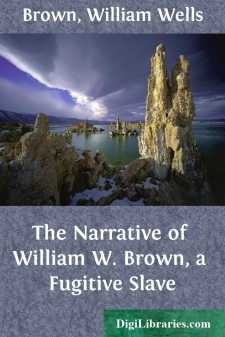 Add to My Favorites
Published: 9 years ago
Downloads: 89
Rating: (0 Votes)

I was born in Lexington, Ky. The man who stole me as soon as I was born, recorded the births of all the infants which he claimed to be born his property, in a book which he kept for that purpose. My mother's name was Elizabeth. She had seven children, viz: Solomon, Leander, Benjamin, Joseph, Millford, Elizabeth, and myself. No two of us were children of the same father. My father's name, as I learned from my mother, was George Higgins. He was a white man, a relative of my master, and connected with some of the first families in Kentucky.

My master owned about forty slaves, twenty-five of whom were field hands. He removed from Kentucky to Missouri, when I was quite young, and settled thirty or forty miles above St. Charles, on the Missouri, where, in addition to his practice as a physician, he carried on milling, merchandizing and farming. He had a large farm, the principal productions of which were tobacco and hemp. The slave cabins were situated on the back part of the farm, with the house of the overseer, whose name was Grove Cook, in their midst. He had the entire charge of the farm, and having no family, was allowed a woman to keep house for him, whose business it was to deal out the provisions for the hands.

A woman was also kept at the quarters to do the cooking for the field hands, who were summoned to their unrequited toil every morning at four o'clock, by the ringing of a bell, hung on a post near the house of the overseer. They were allowed half an hour to eat their breakfast, and get to the field. At half past four, a horn was blown by the overseer, which was the signal to commence work; and every one that was not on the spot at the time, had to receive ten lashes from the negro-whip, with which the overseer always went armed. The handle was about three feet long, with the butt-end filled with lead, and the lash six or seven feet in length, made of cowhide, with platted wire on the end of it. This whip was put in requisition very frequently and freely, and a small offence on the part of a slave furnished an occasion for its use. During the time that Mr. Cook was overseer, I was a house servant—a situation preferable to that of a field hand, as I was better fed, better clothed, and not obliged to rise at the ringing of the bell, but about half an hour after. I have often laid and heard the crack of the whip, and the screams of the slave. My mother was a field hand, and one morning was ten or fifteen minutes behind the others in getting into the field. As soon as she reached the spot where they were at work, the overseer commenced whipping her. She cried, "Oh! pray—Oh! pray—Oh! pray"—these are generally the words of slaves, when imploring mercy at the hands of their oppressors. I heard her voice, and knew it, and jumped out of my bunk, and went to the door. Though the field was some distance from the house, I could hear every crack of the whip, and every groan and cry of my poor mother. I remained at the door, not daring to venture any farther. The cold chills ran over me, and I wept aloud. After giving her ten lashes, the sound of the whip ceased, and I returned to my bed, and found no consolation but in my tears. It was not yet daylight.

My master being a political demagogue, soon found those who were ready to put him into office, for the favors he could render them; and a few years after his arrival in Missouri, he was elected to a seat in the Legislature. In his absence from home, everything was left in charge of Mr. Cook, the overseer, and he soon became more tyrannical and cruel. Among the slaves on the plantation, was one by the name of Randall. He was a man about six feet high, and well-proportioned, and known as a man of great strength and power. He was considered the most valuable and able-bodied slave on the plantation; but no matter how good or useful a slave may be, he seldom escapes the lash. But it was not so with Randall. He had been on the plantation since my earliest recollection, and I had never known of his being flogged. No thanks were due to the master or overseer for this. I have often heard him declare, that no white man should ever whip him—that he would die first.

Cook, from the time that he came upon the plantation, had frequently declared, that he could and would flog any nigger that was put into the field to work under him. My master had repeatedly told him not to attempt to whip Randall, but he was determined to try it. As soon as he was left sole dictator, he thought the time had come to put his threats into execution. He soon began to find fault with Randall, and threatened to whip him, if he did not do better. One day he gave him a very hard task,—more than he could possibly do; and at night, the task not being performed, he told Randall that he should remember him the next morning. On the following morning, after the hands had taken breakfast, Cook called out to Randall, and told him that he intended to whip him, and ordered him to cross his hands and be tied. Randall asked why he wished to whip him. He answered, because he had not finished his task the day before. Randall said that the task was too great, or he should have done it. Cook said it made no difference,—he should whip him. Randall stood silent for a moment, and then said, "Mr. Cook, I have always tried to please you since you have been on the plantation, and I find you are determined not to be satisfied with my work, let me do as well as I may. No man has laid hands on me, to whip me, for the last ten years, and I have long since come to the conclusion not to be whipped by any man living." Cook, finding by Randall's determined look and gestures, that he would resist, called three of the hands from their work, and commanded them to seize Randall, and tie him. The hands stood still;—they knew Randall—and they also knew him to be a powerful man, and were afraid to grapple with him. As soon as Cook had ordered the men to seize him, Randall turned to them, and said—"Boys, you all know me; you know that I can handle any three of you, and the man that lays hands on me shall die. This white man can't whip me himself, and therefore he has called you to help him." The overseer was unable to prevail upon them to seize and secure Randall, and finally ordered them all to go to their work together....