The Mystics A Novel 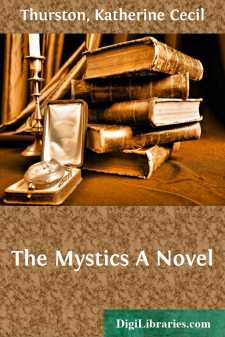 f all the sensations to which the human mind is a prey, there is none so powerful in its finality, so chilling in its sense of an impending event as the knowledge that Death—grim, implacable Death—has cast his shadow on a life that custom and circumstance have rendered familiar. Whatever the personal feeling may be—whether dismay, despair, or relief—no man or woman can watch that advancing shadow without a quailing at the heart, an individual shrinking from the terrible, natural mystery that we must all face in turn—each for himself and each alone.

In a gaunt house on the loneliest point where the Scottish coast overlooks the Irish Sea, John Henderson was watching his uncle die. In the plain, whitewashed room where the sick man lay, a fire was burning and a couple of oil-lamps shed an uncertain glow; but outside, the wind roared inland from the shore, and the rain splashed in furious showers against the windows of the house. It was a night of tumult and darkness; but neither the old man who lay waiting for the end nor the young man who watched that end approaching gave any heed to the turmoil of the elements. Each was self-engrossed.

Except for an occasional rasping cough, or a slow, indrawn breath, no sign came from the small iron bedstead on which the dying man lay. His hard, emaciated face was set in an impenetrable mask; his glazed eyes were fixed immovably on a distant portion of the ceiling; and his hands lay clasped upon his breast, covering some object that depended from his neck.

He had lain thus since the doctor from the neighboring town had braved the rising storm and ridden over to see him in the fall of the evening; and no accentuation of the gale that lashed the house, no increase in the roar of the ocean three hundred yards away, had power to interrupt his lethargy.

In curious contrast was the expression that marked his nephew's face. An extraordinary suppressed energy was visible in every line of John Henderson's body as he sat crouching over the fire; and a look of irrepressible excitement smoldered in the eyes that gazed into the glowing coals. He was barely twenty-three years old, but the self-control that comes from endurance and privation sat unmistakably on his knitted brows and closed lips. He was neither handsome of feature nor graceful of figure, yet there was something more striking and interesting than either grace or beauty in the strong, youthful form and the strong, intelligent face. For a long time he retained his crouching seat on the wooden stool that stood before the hearth; then at last the activity at work within his mind made further inaction intolerable. He rose and turned towards the bed.

The dying man lay motionless, awaiting the final summons with that aloofness that suggests a spirit already partially extricated from its covering of flesh. His glassy eyes were still fixed and immovable save for an occasional twitching of the eyelids; his pallid lips were drawn back from his strong, prominent teeth; and the skin about his temples looked shrivelled and sallow. The doctor's parting words came sharply to the younger man's mind.

"Sit still and watch him—you can do no more."

He reiterated this injunction many times mentally as he stood contemplating the man who for seven interminable years had ruled, repressed, and worked him as he might have worked a well-constructed, manageable machine; and a sudden rush of joy, of freedom and recompense flooded his heart and set his pulses throbbing. He momentarily lost sight of the grim shadow hovering over the house....