The Mystery of the Green Ray 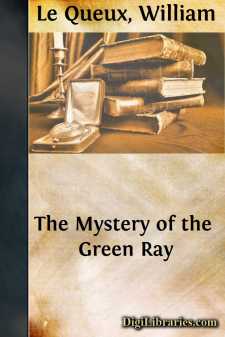 CHAPTER I. BESIDE STILL WATERS.

The youth in the multi-coloured blazer laughed.

“You’d have to come and be a nurse,” he suggested.

“Oh, I’d go as a drummer-boy. I’d look fine in uniform, wouldn’t I?” the waitress simpered in return.

Dennis Burnham swallowed his liqueur in one savage gulp, pushed back his chair, and rose from the table.

“Silly young ass,” he said, in a voice loud enough for the object of his wrath to hear. “Let’s get outside.”

The four of us rose, paid our bill, and went out, leaving the youth and his flippant companions to themselves. For it was Bank Holiday, August the third, 1914, and I think, though it was the shortest and most uneventful of all our river “annuals,” it is the one which we are least likely to forget. On the Saturday Dennis, Jack Curtis, Tommy Evans and myself had started from Richmond on our yearly trip up the river. Even as we sat in the two punts playing bridge, moored at our first camping-place below Kingston Weir, disquieting rumours reached us in the form of excited questions from the occupants of passing craft. And now, as we rose from the dinner-table at the Magpie, Sunbury, two days later, it seemed that war was inevitable.

“What I can’t understand,” growled Dennis, as we stepped into one of the punts and paddled idly across to the lock, “is how any young idiot can treat the whole thing as a terrific joke. If we go to war with Germany—and it seems we must—it’s going to be——Good Heavens! who knows what it’s going to be!”

“Meaning,” said Tom, who never allowed any thought to remain half-expressed, “meaning that we are not prepared, and they are. We have to step straight into the ring untrained to meet an opponent who has been getting ready night and day for the Lord knows how many years.”

“Still, you know,” said Jack, who invariably found the bright spot in everything, “we never did any good as a nation until we were pushed.”

“We shall be pushed this time,” I replied; “and if we do go to war, we shall all be wanted.”

“And wanted at once,” Tom added.

“Which brings me to the point which most concerns us,” said Dennis, with a serious face. “What are we going to do?”

“It seems to me,” I replied, “that there is only one thing we can do. If the Government declare war, it is in your cause and mine; and who is to fight our battles but you and me?”

“That’s it, old man, exactly,” said Dennis. “We must appear in person, as you lawyers would say. I’m afraid there’s not the slightest hope of peace being maintained now; and, indeed, in view of the circumstances, I should prefer to say there is not the slightest fear of it. We can’t honourably keep out, so let us hope we shall step in at once.”

Jack’s muttered “hear hear” spoke for us all, and there was silence for a minute or two. My thoughts were very far away from the peaceful valley of the Thames; they had flown, in fact, to a still more peaceful glen in the Western Highlands—but of that anon. I fancy the others, too, were thinking of something far removed from the ghastly horror of war. Jack was sitting with an open cigarette-case in his hand, gazing wistfully at the bank to which we had moored the boat. There was a “little girl” in the question. Poor chap; I knew exactly what he was thinking; he had my sympathy! The silence became uncomfortable, and it was Jack who broke it.

“Give me a match, Tommy,” he exclaimed suddenly, “and don’t talk so much.” Tom, who had not spoken a word for several minutes, produced the matches from a capacious pocket, and we all laughed rather immoderately at the feeble sally.

“As to talking,” said Tom, when our natural equanimity had been restored, “you all seem to be leaving me to say what we all know has to be said. And that is, what is the next item on the programme?”

“I think we had certainly better decide——” Dennis began.

“You old humbug!” exclaimed Tom. “You know perfectly well that we’ve all decided what we are going to do. It is merely the question of putting it in words. In some way or other we intend to regard the case of Rex v....