The Mystery of a Turkish Bath 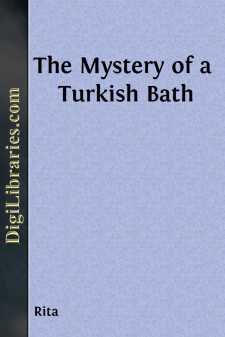 Chapter One. The First Room.

“I take them for rheumatic gout,” said a slight, dark-haired woman to her neighbour, as she leant back in a low lounging-chair, and sipped some water an attendant had just brought her. “You would not suppose I suffered from such a complaint, would you?”—and she held up a small arched foot, with a scarcely perceptible swelling in the larger joint. She laughed somewhat affectedly, and the neighbour, who was fat and coarse, and had decided gouty symptoms herself, looked at her with something of the contempt an invalid elephant might be supposed to bestow on a buzzing fly.

“You made that remark the last time you were here,” she said; “and I told you, if you suffered from a suppressed form of the disease, it would be all the worse for you. Much better for it to come out—my doctor says.”

There was no doubt about the disease having “come out” in the person of the speaker. It had “come out” in her face, which was brilliantly rubicund; in her hands, and ankles and feet, which were a distressful spectacle of “knobs” and “bumps” of an exaggerated phrenological type—perhaps also in her temper, which was fierce and fiery as her complexion, as most of the frequenters of the Baths knew, and the attendants also, to their cost.

The small, dark lady, with the arched feet, lapsed into sulky silence, and let her eyes wander over the room to see if anyone she knew was there.

The Baths were of an extensive and sumptuous description—fitted up with almost oriental luxury and comfort, and attached to a monster hotel, built by an enterprising Company of speculators, at an English winter resort, in Hampshire.

The Company had proudly hoped that lavish expenditure, a beautiful situation, and the disinterested recommendation of fashionable physicians, would induce English people to discover that there were spots and places in their own land as healthy and convenient as Auvergne, or Wiesbaden, or the Riviera. But though the coast views were fine, and the scenery picturesque, and the monster hotel itself stood on a commanding eminence, surrounded by darkly-beautiful pine woods, and was fitted up with every luxury of modern civilisation, including every specimen of Bath that human ingenuity had devised, the Company looked blankly at the returns on their balance-sheet, and one or two Directors murmured audible complaints at special Board meetings, against the fashionable physicians who had not acted up to their promises, or proved deserving of the substantial bonus which had been more than hinted at, as a reward for recommended patients.

On this December morning, some half-dozen ladies, of various ages and stability of person, and all suffering, in a greater or less degree, from various fashionable complaints—such as neuralgia, indigestion, rheumatism, or its aristocratic cousin, rheumatic-gout—were in Room Number One of the Turkish Bath.