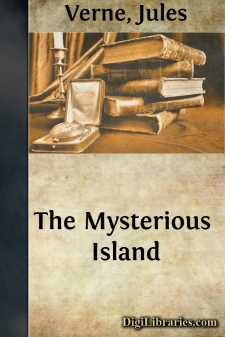 Add to My Favorites
Published: 9 years ago
Downloads: 200
Rating: (0 Votes)

“Are we going up again?”

“No. On the contrary; we are going down!”

“Worse than that, Mr. Smith, we are falling!”

“For God’s sake throw over all the ballast!”

“The last sack is empty!”

“And the balloon rises again?”

“I hear the splashing waves!”

“It is not five hundred feet off!”

Then a strong, clear voice shouted:—

“Overboard with all we have, and God help us!”

Such were the words which rang through the air above the vast wilderness of the Pacific, towards 4 o’clock in the afternoon of the 23d of March, 1865:—

Doubtless, no one has forgotten that terrible northeast gale which vented its fury during the equinox of that year. It was a hurricane lasting without intermission from the 18th to the 26th of March. Covering a space of 1,800 miles, drawn obliquely to the equator, between the 35° of north latitude and 40° south, it occasioned immense destruction both in America and Europe and Asia. Cities in ruins, forests uprooted, shores devastated by the mountains of water hurled upon them, hundreds of shipwrecks, large tracts of territory desolated by the waterspouts which destroyed everything in their path, thousands of persons crushed to the earth or engulfed in the sea; such were the witnesses to its fury left behind by this terrible hurricane. It surpassed in disaster those storms which ravaged Havana and Guadeloupe in 1810 and 1825.

While these catastrophes were taking place upon the land and the sea, a scene not less thrilling was enacting in the disordered heavens.

A balloon, caught in the whirl of a column of air, borne like a ball on the summit of a waterspout, spinning around as in some aerial whirlpool, rushed through space with a velocity of ninety miles an hour. Below the balloon, dimly visible through the dense vapor, mingled with spray, which spread over the ocean, swung a basket containing five persons.

From whence came this aerial traveller, the sport of the awful tempest? Evidently it could not have been launched during the storm, and the storm had been raging five days, its symptoms manifesting themselves on the 18th. It must, therefore, have come from a great distance, as it could not have traversed less than 2,000 miles in twenty-four hours. The passengers, indeed, had been unable to determine the course traversed, as they had nothing with which to calculate their position; and it was a necessary effect, that, though borne along in the midst of this tempest; they were unconscious of its violence. They were whirled and spun about and carried up and down without any sense of motion. Their vision could not penetrate the thick fog massed together under the balloon. Around them everything was obscure. The clouds were so dense that they could not tell the day from the night. No reflection of light, no sound from the habitations of men, no roaring of the ocean had penetrated that profound obscurity in which they were suspended during their passage through the upper air....