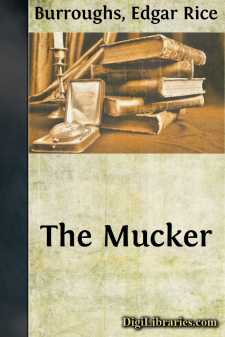 BILLY BYRNE was a product of the streets and alleys of Chicago's great West Side. From Halsted to Robey, and from Grand Avenue to Lake Street there was scarce a bartender whom Billy knew not by his first name. And, in proportion to their number which was considerably less, he knew the patrolmen and plain clothes men equally as well, but not so pleasantly.

His kindergarten education had commenced in an alley back of a feed-store. Here a gang of older boys and men were wont to congregate at such times as they had naught else to occupy their time, and as the bridewell was the only place in which they ever held a job for more than a day or two, they had considerable time to devote to congregating.

They were pickpockets and second-story men, made and in the making, and all were muckers, ready to insult the first woman who passed, or pick a quarrel with any stranger who did not appear too burly. By night they plied their real vocations. By day they sat in the alley behind the feedstore and drank beer from a battered tin pail.

The question of labor involved in transporting the pail, empty, to the saloon across the street, and returning it, full, to the alley back of the feed-store was solved by the presence of admiring and envious little boys of the neighborhood who hung, wide-eyed and thrilled, about these heroes of their childish lives.

Billy Byrne, at six, was rushing the can for this noble band, and incidentally picking up his knowledge of life and the rudiments of his education. He gloried in the fact that he was personally acquainted with "Eddie" Welch, and that with his own ears he had heard "Eddie" tell the gang how he stuck up a guy on West Lake Street within fifty yards of the Twenty-eighth Precinct Police Station.

The kindergarten period lasted until Billy was ten; then he commenced "swiping" brass faucets from vacant buildings and selling them to a fence who ran a junkshop on Lincoln Street near Kinzie.

From this man he obtained the hint that graduated him to a higher grade, so that at twelve he was robbing freight cars in the yards along Kinzie Street, and it was about this same time that he commenced to find pleasure in the feel of his fist against the jaw of a fellow-man.

He had had his boyish scraps with his fellows off and on ever since he could remember; but his first real fight came when he was twelve. He had had an altercation with an erstwhile pal over the division of the returns from some freight-car booty. The gang was all present, and as words quickly gave place to blows, as they have a habit of doing in certain sections of the West Side, the men and boys formed a rough ring about the contestants.

The battle was a long one. The two were rolling about in the dust of the alley quite as often as they were upon their feet exchanging blows. There was nothing fair, nor decent, nor scientific about their methods. They gouged and bit and tore. They used knees and elbows and feet, and but for the timely presence of a brickbat beneath his fingers at the psychological moment Billy Byrne would have gone down to humiliating defeat....