The Moving Picture Boys on the Coast Or, Showing Up the Perils of the Deep 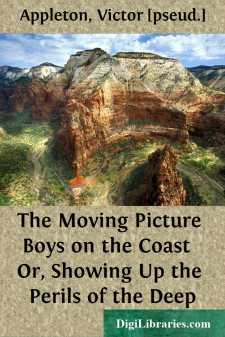 “Well, Blake, it doesn’t seem possible that we have succeeded; does it?” and the lad who asked the question threw one leg over the saddle of his pony, to ride side fashion for a while, as a rest and change.

“No, Joe, it doesn’t,” answered another youth. “But we sure have got some dandy films in those boxes!” and he looked back on some laden burros that were following the cow ponies across a stretch of Arizona desert.

“Well, all I’ve got to say,” remarked the cowboy, the third member of the trio; “is that taking moving pictures is about as strenuous work as rounding up or branding cattle.”

“I guess you don’t quite believe that, Hank; do you?” asked Blake Stewart. “You haven’t seen us work so very hard; have you?”

“Work hard? I should say I have,” answered Hank Selby. “Why, the time those Indians charged our cave, and Joe and I, and Munson and his crowd were getting ready to fire point-blank at them, there you stood, with bullets whizzing near you more than once, grinding away at the handle of your moving picture camera as hard as you could. Hard work—huh!”

“But we got the films,” declared Blake, not caring to go too deeply into an argument. “And I’m anxious to see how they will develop.”

“So am I,” declared Joe. “I wonder what will be next on the program?”

“Why, you’re going to look for your father; aren’t you, Joe—your father whom you haven’t seen since you were a little chap—whom you can’t even remember?” and Blake looked sharply at his chum and partner, Joe Duncan.

“That’s what I am, Blake, just as soon as I can get to the coast. But I mean, what will we do after that? Go back to New York?”

“I suppose so, and take up our trade of making moving picture films for whoever wants them. It will be a rather tame life after the excitement we have had out here.”

“That’s what. But maybe it will be good for a change.”

The two moving picture boys, I might explain briefly, were on their way to Flagstaff, Arizona, after having gone out into the wilds, with a cowboy guide, Hank Selby, to make moving picture films of some Moqui Indians who had broken away from their reservation, to indulge in some of their weird dances and ceremonies.

While making these films, the boys and their companion, who were hidden in a cave where the Indians could not see them, saw the redmen about to torture, as they thought, four white prisoners. Joe and Blake recognized these men as their business rivals, who were also trying to get some moving picture films of the Indians, to secure a prize of a thousand dollars, offered by a New York geographical and ethnological society.

To fire on the Indians, and thus save the white captives, meant that Joe, Blake and Hank would disclose their position in the cave, but there was nothing else to do, and they did it.

The white captives, unexpectedly freed, came rushing toward the shelter, with the savages after them, and it looked as if there would be a fierce fight....