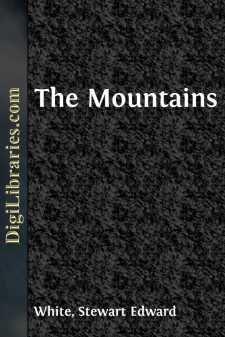 Six trails lead to the main ridge. They are all good trails, so that even the casual tourist in the little Spanish-American town on the seacoast need have nothing to fear from the ascent. In some spots they contract to an arm's length of space, outside of which limit they drop sheer away; elsewhere they stand up on end, zigzag in lacets each more hair-raising than the last, or fill to demoralization with loose boulders and shale. A fall on the part of your horse would mean a more than serious accident; but Western horses do not fall. The major premise stands: even the casual tourist has no real reason for fear, however scared he may become.

Our favorite route to the main ridge was by a way called the Cold Spring Trail. We used to enjoy taking visitors up it, mainly because you come on the top suddenly, without warning. Then we collected remarks. Everybody, even the most stolid, said something.

You rode three miles on the flat, two in the leafy and gradually ascending creek-bed of a cañon, a half hour of laboring steepness in the overarching mountain lilac and laurel. There you came to a great rock gateway which seemed the top of the world. At the gateway was a Bad Place where the ponies planted warily their little hoofs, and the visitor played "eyes front," and besought that his mount should not stumble.

Beyond the gateway a lush level cañon into which you plunged as into a bath; then again the laboring trail, up and always up toward the blue California sky, out of the lilacs, and laurels, and redwood chaparral into the manzanita, the Spanish bayonet, the creamy yucca, and the fine angular shale of the upper regions. Beyond the apparent summit you found always other summits yet to be climbed. And all at once, like thrusting your shoulders out of a hatchway, you looked over the top.

Then came the remarks. Some swore softly; some uttered appreciative ejaculation; some shouted aloud; some gasped; one man uttered three times the word "Oh,"—once breathlessly, Oh! once in awakening appreciation, OH! once in wild enthusiasm, OH! Then invariably they fell silent and looked.

For the ridge, ascending from seaward in a gradual coquetry of foot-hills, broad low ranges, cross-systems, cañons, little flats, and gentle ravines, inland dropped off almost sheer to the river below. And from under your very feet rose, range after range, tier after tier, rank after rank, in increasing crescendo of wonderful tinted mountains to the main crest of the Coast Ranges, the blue distance, the mightiness of California's western systems. The eye followed them up and up, and farther and farther, with the accumulating emotion of a wild rush on a toboggan. There came a point where the fact grew to be almost too big for the appreciation, just as beyond a certain point speed seems to become unbearable. It left you breathless, wonder-stricken, awed. You could do nothing but look, and look, and look again, tongue-tied by the impossibility of doing justice to what you felt. And in the far distance, finally, your soul, grown big in a moment, came to rest on the great precipices and pines of the greatest mountains of all, close under the sky....