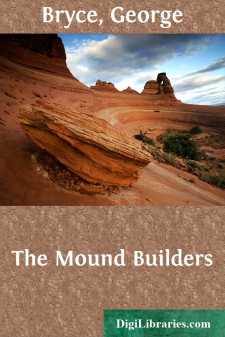 The Mound Builders. A Lost Race Described by Dr. Bryce, President of the Historical Society. SEASON 1884-85

Ours are the only mounds making up a distinct mound-region on Canadian soil. This comes to us as a part of the large inheritance which we who have migrated to Manitoba receive. No longer cribbed, cabined, and confined, we have in this our "greater Canada" a far wider range of study than in the fringe along the Canadian lakes. Think of a thousand miles of prairie! The enthusiastic Scotsman was wont to despise our level Ontario, because it had no Grampians, but the mountains of Scotland all piled together would reach but to the foot hills of our Rockies. The Ontario geologist can only study the rocks in garden plots, while the Nor'wester revels in the age of reptiles in his hundreds of miles of Cretaceous rocks, with the largest coal and iron area on the continent. As with our topography so with history. The career of the Hudson's Bay Company, which is in fact the history of Rupert's Land, began 120 years before the history of Ontario, and there were forts of the two rival Fur Companies on the Saskatchewan and throughout the country, before the first U. E. Loyalist felled a forest tree in Upper Canada. We are especially fortunate in being the possessors also of a field for archaeological study in the portion of the area occupied by the mound builders—the lost race, whose fate has a strange fascination for all who enquire into the condition of Ancient America.

The Indian guide points out these mounds to the student of history with a feeling of awe; he says he knows nothing of them; his fathers have told him that the builders of the mounds were of a different race from them—that the mounds are memorials of a vanished people—the "Ke-te-anish-i-na-be," or "very ancient men." The oldest Hudson's Bay officer, and the most intelligent of the native people, born in the country, can only give some vague story of their connection with a race who perished with small-pox, but who, or whence, or of what degree of civilization they were, no clue is left.

It must be said moreover that a perusal of the works written about the mounds, especially of the very large contributions to the subject found in the Smithsonian Institution publications, leaves the mind of the reader in a state of thorough confusion and uncertainty. Indeed, the facts relating to the Mound Builders are as perplexing a problem as the purpose of the Pyramids, or the story of King Arthur.

Is it any wonder that we hover about the dark mystery, and find in our researches room for absorbing study, even though we cannot reach absolute certainty? Could you have seen the excitement which prevailed among the half-dozen settlers, I had employed in digging the mound on Rainy River, in August last, when the perfect pottery cup figured below was found, and the wild enthusiasm with which they prosecuted their further work, you would have said it requires no previous training, but simply a successful discovery or two to make any one a zealous mound explorer....