The Motor Boat Club and The Wireless Or, the Dot, Dash and Dare Cruise 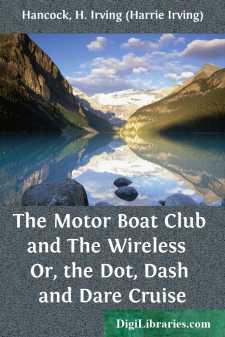 “Ho, ho, ho—hum!” grumbled Hank Butts, vainly trying to stifle a prodigious yawn. “This may be what Mr. Seaton calls a vacation on full pay, but I’d rather work.”

“It is fearfully dull, loafing around, in this fashion, on a lonely island, yet in plain sight of the sea that we long to rove over,” nodded Captain Tom Halstead of the motor yacht “Restless.”

“Yet Hank just put us in mind of the fact that we’re getting paid for our time,” laughed Joe Dawson, the least restless of the trio of young Motor Boat Club boys.

“Oh it’s all right on the pay end,” agreed Hank, readily. “But just think of a young fellow, full of life and hope, with a dozen ambitions and a hustling nature, taking up with a job of this kind!”

“The job of being bored,” answered Butts, solemnly. “I could have had that kind of job back on Long Island.”

“Without the pay,” amended Joe Dawson, with another quiet smile.

“But ten days of being bored does grow rather wearisome, even with the pay for a solace,” agreed Tom Halstead.

Ting-ling-ling! The soft jangling of a bell from one of the rooms of the seashore bungalow, on the porch of which the boys sat, broke in on them.

“Hurrah, Joe! Hustle and get that message,” begged Hank, almost sitting up straight in the porch chair, with a comical pretense of excitement. “It’s sure to be from Mr. Seaton this time.”

“Likely,” grinned Joe, as he rose and crossed the porch in leisurely fashion. The jangling of the bell continued. The bell was a rather clumsy, yet sufficing device that young Dawson had attached to the wireless telegraph apparatus.

For, though this bungalow on a little island southwest of Beaufort, North Carolina, had an appearance of being wholly out of the world, yet the absent owner, Mr. Powell Seaton, had contrived to put his place very much “in the world” by installing wireless telegraphy at the bungalow. On the premises was operated a complete electrical plant that furnished energy enough to send messages for hundreds of miles along the coast.

For Joe, the mechanical genius of the Motor Boat Club, had always had a passion for telegraphy. Of late he had gone in in earnest for the wireless kind, and had rapidly mastered its most essential details.

The bell told when electrical waves were rushing through the air at marvelous speed, though it did not distinguish between any general wave and the special call for this bungalow station, which was by the letters “CBA.”

When Joe Dawson went into the room under the tall aerials that hung from the mast, he expected to listen only to some message not in the least intended for this station.

Seating himself by the relay, with its Morse register close at hand, Joe Dawson picked up and adjusted the head-band with its pair of watch-case receivers. He then hastily picked up a pencil, shoved a pad of paper close under his hand and listened....